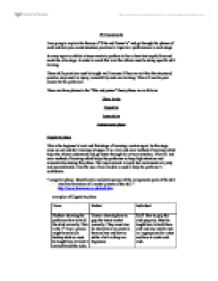 I am going to explain the theory of “Fitts and Posner’s” and go through the phases of each and how you would structure practices to improve a performance in each stage.

In every sport an athlete always wants to perform to his or hers best capabilities and reach the elite stage. In order to reach this level the athlete must be doing specific skill training.

These skills practices must be taught well because if they are not then the structured practice may result in injury, reversibility and over training. This will lead to poor results for the performer.

To improve in a cognitive stage you would use the distributed method because the training sessions would then ivolve rest intervals which could be used also for feedback purposes and gives time to the performer to recover. Distrubuted practice mainly means a technique where an athlete distributes his or her study effort in a given course over many study sessions that are relatively short in duration. This can be compared to massed practice (otherwise known as cramming) whereby the student conducts few but long practice sessions for a given course. An example of distrubuted practice is making a pass in hockey. This is a basic skill for beginners to learn and also is important to learn. To do this is in a training session you could get in a circle and make pass’s to each other it’s a simple but effective session which could be performed in every training session and to develop this futher you could increase the distance and also learn athlete how to reverse pass.

This is the 2nd phase of learning a sport. Also know as the intermediate stage in learning a sport. It involves the athlete learning and getting to a certain skill level in there sport and now skills such as passing a ball in football should be found to be easy and not a lot of thinking process has to be used in order to do so. In this stage specific motor programmes and subrotation are developed which are common in that sport. Coordination, technique, timing and anticipation improve quickly. Gross error detction and correction is practiced and utilised. And these are practiced over and over again and also use feedback in order to try and get to the elite stage and this stage MUST follow the congotive stage as you can not go straight the this stage.

To improve in a assocated stage you would use a variable method because this method practice conditions are varied to encourage the formation of schema, the practice designed to deal with many situations, and is near near to competitive and is relative to open skills. An example of variable practice could be playing  in a team of 5 and playing two touch football. Teams have to score by only usiing two touchs per person this helps being able to find space and controlling ball. As it’s a varible practice method it can be changed to other training methods which deveop either a different skill or the same

This is the 3rd and final phase of learning in a certain sport. In this stage the performer automatically performs a move easily without to much tought, they are also aware of any enviormental issues such as the pitchs condition for and example it could be a wet pitch so if they are a defender in a football they have to be aware that the ball is going to move on the ball much quicker so tackles have to be timed correctly. This is the stage which elite performers must be at and they now should have the capabilties of not even having to think about for example what they are going to do with a free kick it should now be a natural though process and also the don’t need feed back any more the athlete should now be able to tell and correct himself when ever he or she makes a mistake.

To improve a performer in this stage you would use a fixed method because this involves a learned skill which in this stage the perfomer should know inside out and all it need it’s a little adjusting depending on what happened in a match like situation. Also in this training it provides different situations which repond to a game and tactics and strategies should now be haevily involved in a players game. An example of a fixed practice could be taking a free kick in football. The player should now automatically know were he or she is going to place it and then perform the correct technique to do so. They are also adapted to there surroundings and use natural occurances such as the wind to there advantage.

To conclude that the three main stages of learning are cognative phase, associated phase and autonomous phase. You must stary from cognitive phase first and progress to the other two phases for each phase there is a certain type of method that improves the performer at that stage to move to a higher level. The practice methods that you van use are fixed practice, variable pratice, distributed pracice and massed practice. For a cognitive performer to reach an elite level they will have to work really hard and learn a lot of skills and techniques. This will help the perfomer reach the top of there sport.