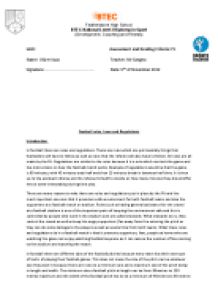 ﻿Featherstone High School BTEC National Level 3 Diploma in Sport (Development, Coaching and Fitness) Unit: Assessment and Grading Criteria: P1 Name: Oliver Issac Teacher: Mr Sangha Signature:............................................. Date: 9th of November 2012 Football rules, Laws and Regulations Introduction In football there are rules and regulations. There are rules which are just basically things that footballers will have to follow as well as rules that the referee will also have to follow. All rules are all made by the FA. Regulations are similar to the rules because it is a rule which controls the game and has instructions on how the football match works. Example of regulations would be that the game is 90 minutes, with 45 minutes each half and then 15 minutes break in between half time. It is then up to the assistant referee and the referee himself to decide on how many minutes they should offer hence some timewasting during time play. There are many reasons to why there are rules and regulations put in place by the FA and the most important ones are that it provides a safe environment for both football teams and also the supporters at a football match or stadium. ...read more.

If teams are still drawing then it is penalty kicks for both teams, and that will be given as much time until someone wins. Before a team can kick off, someone has to make the decision of who kicks off and that?s the referee?s decision. The way a referee would make the decision bringing both of the captains of the two teams and by tossing a coin and the captain that wins the toss will kick off. When a football team scores a goal, the other will get the advantage by placing the ball back to the centre and kick off. For the game to start with the ball in the middle, your team must be in their own half and the other team should also be in their half, the match should not continue from centre mark until given signal by the referee. The game can be restarted by the referee after a temp0orary stoppage that is necessary. The way this happens is by having the referee dropping the ball at the place where it was located when the play was stopped and have two players from both teams. In football, the ball can stay in play or leave the football ground which is out of play. ...read more.

They have done this because it ruins the fair play between the teams especially when the games are very important. In order for a team to win a match, the team has to have more goals than the other team and if it ends up being equal, then the game ends as a draw which means neither of the teams won. In some games there might be extra time provided because one team has to win so therefore they play with extra time. A goal can be scored from anywhere on the play, from anyone who is playing and that included the goalkeeper too. Goals are also scored from penalties and free kicks. However a goal cannot be scored directly from a throw in so therefore it has to be touched by someone else after the throw in order to score a goal. A goal cannot be counted if the referee has not blown his whistle for the game to restart. Another way a goal cannot be scored is if you are taking an indirect free kick because it?s indirect so therefore the ball has to be passed to someone in your team and then you can score. ...read more.