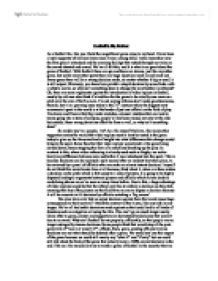 Football's Big Brother As a football fan, like you I hold the magnificent game close to my heart. I have been a loyal supporter of my local team since I was a young child. I even remember now the first game I witnessed and the amazing feelings that rushed through my veins as the crowd chanted and roared. We've all felt this, and it is what is so great about the game of football. With football there are ups and there are downs, just like any other game, but unlike most other sports there are huge injustices week in and week out. Every game there will be a wrong decision made, no matter whether it big or small it is still unjust. Obviously, you know how painful a stupid decision by some bloke with a whistle can be, so why isn't something done to change the way football is refereed? Ok, there are some arguments against the introduction of video replays in football, mostly by old men who think it's tradition for the game to be ruled by one man on a pitch over the size of half an acre. ...read more.

In contrast to this, where video refereeing is already used such as Rugby, we notice barely any difference between now and before it was introduced into the sport. This is because decisions can be replayed a split second after an incident has taken place, to be reviewed by a panel of officials who can make an almost instant decision. I myself do not think this would waste time at all because, think about it, when a referee makes a decision on the pitch which is felt unjust to a side of players, it is going to be highly disputed leading to arguments between players and officials which in turn leads to cards being shown as we've seen so many times before. Due to this, a huge advantage of video replays would be that the referee only has to enforce a decision on the pitch, meaning that any of the players on the field have no one to dispute a decision because it will be accurate in it's decision by officials watching a 'big screen' Has your team ever had an unjust decision against them that could cause huge consequences to their survival? ...read more.

This as a fan would allow us to watch a game of football in the security that we would not simply lose the game on a decision being unfair but simply on the fact that we were outplayed or vice versa. I am not out rightly saying that video replays should be permanently introduced into football because who knows what changes it could really make to the game, I am simply saying why don't we give it a chance? There are so many advantages that come with this idea that you may agree with, but again some disadvantages that people do not want to lose as a result of change. The verdict is merely for you devoted football supporters out there to preside over and make a decision because it will be you, the fan who will feel the effects. There are more football fans in the world than Christian believers... Football has a religious following to millions of people across the world, but no person can have faith in something that they do not believe preaches the truth throughout, change can only succumb. ?? ?? ?? ?? ...read more.