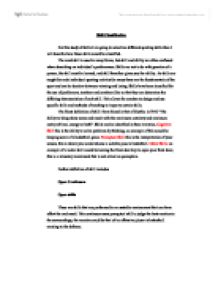 For this study of skills I am going to select ten different sporting skills then I will describe how these skills would be classified.

Skill Classification For this study of skills I am going to select ten different sporting skills then I will describe how these skills would be classified. The word skill is used in many forms, but skill and ability are often confused when describing an individual's performance. Skills are not to do with genetics of a person, the skill must be learned, and skill therefore gives you the ability. As skills are taught for each individual sporting activity for many these are the fundamentals of the sport and can be decisive between winning and losing. Skills have been classified for the use of performers, teachers and coaches alike so that they can determine the differing characteristics of each skill. This allows for coaches to design and use specific drills and methods of teaching to improve certain skills. The finest definition of skill I have found is that of Gurthie in 1952 "The ability to bring about some end result with the maximum certainty and minimum outlay of time, energy or both". Skills can be identified in three varieties, Cognitive Skill this is the ability to solve problems by thinking; an example of this would be keeping score of a basketball game. ...read more.

Gymnastic Routine Gymnastic routines are carried out within the same environment nearly every time without any form of direct opposition; this will make the routine a closed skill. The speed at which the gymnast performs is self-controlled, so the pacing continuum would be a self-paced skill. The gymnast's routine consists of many of discrete skills with a significant sequence so it is a serial skill. The routine would be classed as a gross skill as there are a large muscles used. Basketball Free Throw A basketball free throw is a discrete skill as it has a beginning and an end that are easily noticeable. The action is initiated when the player receives the ball from the referee and the end of the player's action is when the ball is released. The skill is closed because you stand-alone without an opposition contesting your actions, on the free throw line 15 foot away from the basket. The action of the free throw is self-paced because it is a skill performed at a rate that the performer decides, as long as it is less than 5 seconds. A free throw is a gross skill because it involves 4 major muscles quadriceps, calf, triceps and forearm. ...read more.