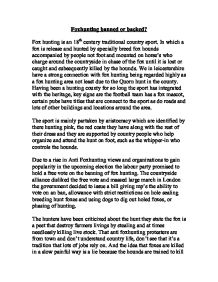 Foxhunting banned or backed? Fox hunting is an 18th century traditional country sport. In which a fox is release and hunted by specially breed fox hounds accompanied by people not foot and mounted on horse's who charge around the countryside in chase of the fox until it is lost or caught and subsequently killed by the hounds. We in leicestershire have a strong connection with fox hunting being regarded highly as a fox hunting area not least due to the Quorn hunt in the county. Having been a hunting county for so long the sport has integrated with the heritage, key signs are the football team has a fox mascot, certain pubs have titles that are connect to the sport as do roads and lots of other buildings and locations around the area. ...read more.

The hunters have been criticized about the hunt they state the fox is a pest that destroy farmers livings by stealing and at times needlessly killing live stock. That anti foxhunting protesters are from town and don't understand country life, don't see that it's a tradition that lots of jobs rely on. And the idea that foxes are killed in a slow painful way is a lie because the hounds are trained to kill quickly. And that hunting them keeps down their numbers that helps prevent them from damaging farmer's livestock. And the only other way of killing them gassing and sealing them in holes causes a slower agonizing death. The hunters say that if a ban is pass on fox hunting the job losses and damage to farmers and the countryside would be devastating. ...read more.

That their killing is needless and the ban need to pass for their protection. I believe that fox hunting is just a cruel way of bullying and butchering a innocent fox. That the people who partake in it are just wanting to charge over the countryside without regard to try and relive an outdated past and heritage. And they try to justify the killing of foxes with yes true reasons of foxes killing live stock, farming has been around for thousands of years I don't think some lost chickens will make a serve difference. But the true reason that they kill the foxes is a fascination with killing and to continue a unneeded tradition. I support a ban of hunting with foxes and support the idea of using a drag hunt instead of a fox hunt, which is a fur scented and drag for hunter to follow. ...read more.