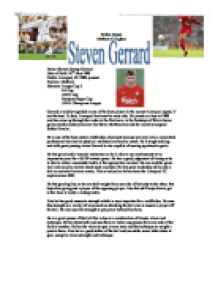 Gerrard is widely regarded as one of the best players in the current Liverpool squad, if not the best. To date, Liverpool has been his only club. He joined as a boy in 1989

Perfect Model Matthew Callaghan Name: Steven George Gerrard Date of Birth: 30th May 1980 Club/s: Liverpool FC 1989-present Position: Midfield Honours: League Cup 2 FA Cup UEFA Cup European Super Cup UEFA Champions League Gerrard is widely regarded as one of the best players in the current Liverpool squad, if not the best. To date, Liverpool has been his only club. He joined as a boy in 1989 and has come up through the ranks to the first team, in the footsteps of fellow home grown youth academy seniors like Steve McManaman and the recently resigned Robbie Fowler. ...read more.

He has good cardio vascular endurance as he is able to run continuously at an impressive pace for a full 90 minute game. He has a good judgement of timing as he is able to make a successful tackle at the appropriate moment. He can read the game well and can plan moves ahead such as passes. He has great leadership skills and is able to motivate his team mates. This is noticed as he has been the Liverpool FC captain since 2003. ...read more.

He also uses his strength to put power behind his shots. He is a great passer of the ball this is due to a combination of talents, vision and technique. He has these both and uses them to make long passes from one side of the field to another. He has the vision to spot a team mate and the technique to weight a pass to them. Also he is a good striker of the ball and can strike some lethal shots at goal, using his vision strength and technique. ...read more.