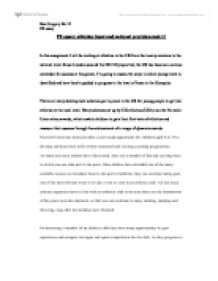 PE essay: athletics (local and national provision-task 4) In this assignment I will be looking at athletics in the UK from the local provisions to the national level. Since London secured the 2012 Olympic bid, the UK has become a serious contender for success at the games. I'm going to assess the ways in which young talent is identified and how they're guided to progress to the level of those in the Olympics. There are many development schemes put in place in the UK for young people to get into athletics at the local level. Many schemes set up by UK athletics (UKA) run the Norwich Union shine:awards, which enable children to gain their first taste of athletics and measure their success through the achievement of a range of dynamic awards. Norwich Union star:track provides a year round opportunity for children aged 8 to 15 to develop and hone their skills within structured and exciting coaching programmes. ...read more.

jumps, throws, sprints and hurdles. They are organized to educate in the events and help athletes with issues such as nutrition and also offer physio treatment on the day. Elite performers can get sponsorship from local businesses or brands of clothing e.g. Nike, Adidas, Asics etc. They choose to sponsor athletes at an elite level as they will be advertising there products on television and at large events. There isn't as much money in athletics in comparison to sports such as football however when athletes have the potential to win medals on the world stage or have already done so they may be entitled to finance supplied by the national lottery grant, additional agencies such as lottery funding allow athletes to train full time and not have to supplement their training with full time employment giving them the best possible chance to achieve their potential. The Awards for All in England will award grants of between �300 and �10,000 for people to take part in art, sport, heritage and community activities, and projects that promote education, the environment and health in the local community. ...read more.

At an elite level however there are minimal differences: male athletes have to race over hurdles at a higher setting and over a longer distance, all the throwing implements are heavier for men and women compete in heptathlon whereas men do the decathlon. I believe the sport of athletics would benefit from more attention and modernization of the grassroots development to many talented young athletes are lost in the system to other sports such as football or rugby at a young age when they should be encouraged and motivated to stay in the sport of athletics where they could ultimately become more successful. More televised events should be broadcast in athletics to advertise the sport and make it more attractive sport to be involved in. If more money is pushed into the sport in all areas from grassroots to national elite level I am confident that we will produce better athletes and Great Britain will go into the London 2012 Olympics with the best chance of success ever. ...read more.