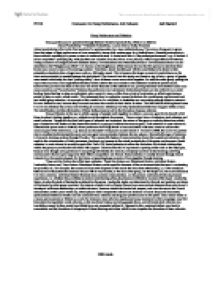 Group Performance and Cohesion Group performance is perceived through Steiners Model of productivity, which is as follows: Actual Productivity = Potential Productivity - Losses Due to Faulty Processes Actual productivity refers to the final product of a sporting action by a team collectively e.g. The score a diving pair is given from the judges of their performance or how successful a corner kick routine goes for a football team. Potential productivity is the maximum capability of a person or team to achieve the task. In basic terms this is "the perfect performance", e.g. A formula 1 driver completes a qualifying lap with absolute zero mistakes from the driver or car; this lap will be impossible to be bettered. Faulty processes are categorized two different factors, Co-ordinational and Motivational losses. Co-ordinational losses can be described as the "Ringlemann effect". It is known as the Ringlemann effect because he was the first person to state that these losses occur more in teams of increasing numbers. ...read more.

Group Cohesion is the way in which a group of people work together to achieve a common goal for the benefit of all those involved, sticking together as a collective unit throughout the process. There are two forms of cohesion; task cohesion and social cohesion. Despite the fact that both types of cohesion are important, the nature of the game or activity determines which type of cohesion will further aid the interaction levels in a group to achieve the common goal. Task cohesion is most relevant in interactionist sports such as football, where performers have high levels of communication with team mates to achieve the common goal of the entire team, e.g. Rooney and Ronaldo's fast paced counter attack vs. Arsenal in 2008, the move was perfect due to excellent individual performance and very good communication between the two players. Normally this type of cohesion is formed in training routines through Practice. ...read more.

Leadership styles are determined by the task and position and status of the leader by other group members, for instance a leader such as Steven Gerrard can communicate between those who haven't developed sufficient relationships yet within the team. However should the leader lack respect, such was the case in the French national team at this years world cup, where players didn't respect the actions and decisions of coach Raymond Domenech, dysfunctional behaviour breaks out and minimises team cohesion causing poor performances on the pitch. Team factors refers to a teams past successes or failures as a unit, for instance a team who has experienced many successes in their campaigns may find themselves having better social cohesion, as the combined victory can bring people closer, and obviously task cohesion was inevitably present for they would most likely have not succeeded without it. Opposed to this, continual defeats may lead to accusations and the formation of sub-groups of those blaming each other which in turn impedes the formation of team cohesion. ?? ?? ?? ?? PE SR Discussion On Group Performance And Cohesion Jack Basford 1008 words ...read more.