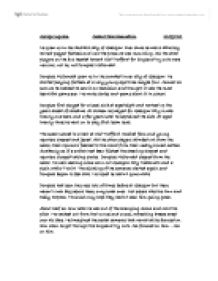 He grew up in the Scottish city of Glasgow. Ever since he was a little boy he had played football

George Ingram Accent Discrimination 10/09/04 He grew up in the Scottish city of Glasgow. Ever since he was a little boy he had played football and now the pressure was mounting. All the other players on the bus headed toward Old Trafford for England try outs were nervous, not he, not Douglas McDonald. Douglas McDonald grew up in the crowded inner city of Glasgow. He started playing football at a very young age three maybe four. Almost as soon as he walked he saw it on television and thought it was the most beautiful game ever. He wrote stories and poems about it in school. Douglas first played for a local club at aged eight and worked up the years ahead of schedule. At sixteen he played for Glasgow City Under twenty-one team and a few years later he captained the side. At aged twenty-three he went on to play first team level. The coach slowed to a halt at Old Trafford. Excited fans and young reporters cheered and jeered. All the other players climbed out from the coach, their sponsors flashed to the crowd from their neatly ironed clothes. ...read more.

Douglas threw the control across the room and stormed down the stairs. He went to the bar where he had a large beer. Soon the rest of the players had congregated down the stairs and were heading out when Sven, the manager and coach came over to Douglas and said, "Don't listen to those reporters," as though he knew what Douglas was thinking, "Come out and celebrate the victory." Douglas went with the team and had a few drinks. He began to think that he was having a good time, even though they constantly joked about his accent and the news reporter. Then after they came out from the third bar one of the players who was very drunk said a little louder than he meant to, "That Scottish pillock thinks he's so good," Then he continued shouting even louder, "that Scottish prat thinks he's so good." Douglas got back to the hotel minutes later. He threw his bags across the room in anger then packed all his stuff and left in a fit of rage. When he got back to London he calmed himself and traveled back to Glasgow the next morning. ...read more.

Douglas was very confident and had a very good feeling about this game. The whistle blew and the game began. England played solidly and Poland, whom they had beaten in the first round of qualifying, did as well. However, the final score was England seventeen, Poland nil. Out of the seventeen goals scored Douglas had scored fifteen. This was the most goals scored at International level by any one player in any one match. It was a new World Record. After this match, Douglas watched The News something which he had refused to do ever since his earlier experience for England. The same reporter as that time said in a bewildered voice, "The Worlds best ever performance by a truly outstanding player." The other reporter then said, "Yes it was. Literally. That match will be played on international television for centuries to come. Compared to the Scots last two England games it was more than jus beating a World record it was like beating twenty. This will open so many doors for McDonald and it's a good present for his twenty-forth Birthday last week. AS Douglas grew older he wrote a book on his experiences and discrimination. It became a best-seller and now he's a World record holder in Football and Literacy. ...read more.