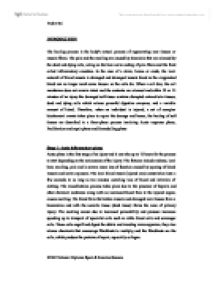 INTRODUCTION The healing process is the body's natural process of regenerating new tissues or muscle fibres. The pain and the swelling are caused by chemicals that are released by the dead and dying cells, acting on the bare nerve ending of pain fibres and the fluid called inflammatory exudates. In the case of a strain, bruise or crush, the local network of blood vessels is damaged and damaged vessels bleed as the oxygenated blood can no longer reach some tissues- so the cells die. When a cell dies, the cell membrane does not remain intact and the contents are released and within 10 or 15 minutes of an injury the damaged soft tissue contains disrupted extracellular tissues, dead and dying cells which release powerful digestive enzymes, and a variable amount of blood. Therefore, when an individual is injured, a set of complex biochemical events takes place to repair the damage and hence, the healing of soft tissues are described in a three-phase process involving Acute response phase, Proliferation and repair phase and Remodelling phase Stage 1: Acute inflammatory phase Acute phase is the first stage of an injury and it can take up to 72 hours for the process to start depending on the seriousness of the injury. ...read more.

This stage begins when the haematoma is sufficient to make smaller size to allow room for the growth of new tissue. Although the skin has the ability to regenerate new skin tissue, the other soft tissues replace damaged cells with scar tissue and this new cell regenerate continues for approximately for three days. The cells canalise and blood begins to flow round the loops, which approach the injured area. Thus, all around the injured area there develops a wall of capillary loops filled with blood. The healing through scar formation beings with accumulation of excluded fluid containing a large concentration of protein and damaged cellular tissues. This accumulation forms the foundation for a highly vascularised mass of immature connective tissues that include fibroblasts, cells capable of generating collagen. At about 12-24hours fibrocystic begin to fatten up and move towards the injury. The fibroblasts begin to produce new collagen through a process known as fibroplasias and soon they start to multiply and by approximately the fifth day, they begin to lay down fibrils of collagen. The vascular connective tissue will produce over the injury and by the next, two to four weeks scar tissue increases strength and decreases in vascularise. ...read more.

If these tissues undergo abnormally high tensile stress before scar tissue formation is complete, the newly formed tissues will elongated and this may result joint instability in ligament. When an injury is healed, the tissue is never the same as it was before and the nerve endings do not regenerate. CONCLUSION The three phases for healing process of an injury are Acute response phase, Proliferation and repair phase and Remodelling phase. In acute response, a various cells including white blood cells and scavenger cells are involved to the region to begin the process of cleaning up debris. These cells also release chemicals that support fibroblasts to multiply that produce protein of repair called collagen. In a proliferation phase more oxygenated blood are brought into injured area. Fibroblasts drift to the injury forming collagen substances, the new protein fibres are laid down in a random manner, and hence, the scar tissue begins to contract. In a final stage or remodelling phase, the protein fibres of the scar orient themselves in the direction in which pressure is applied. The protein matures, the number of cells in the tissue decreases, and hence, it may take several months for the scar to fully mature and achieve its full strength. ...read more.