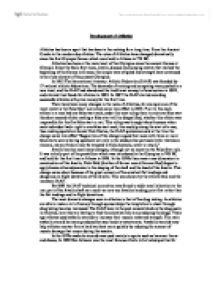 Development of Athletics Athletics has been a sport that has been in the making for a long time. From the Ancient Greeks to the modern day athletes. The rules of Athletics have changed dramatically since the first Olympic Games which were held in Athens in 776 BC. Athletics has been at the main heart of the Olympics since the ancient Games at Olympia. Since the basic foot races, javelin, discuss and jumping events that marked the beginning of the Games in Greece, the simple tests of speed and strength have continued to be a key element of the present Olympics. In 1912 The International Amateur Athletic Federation (IAAF) was founded by 17 national athletic federations. The demands of training and competing were pushed to a new level, and the IAAF had abandoned the traditional concept of amateurism in 1982, and allowed trust funds for athletes in 1985. ...read more.

in the stadium but particularly for television viewers, many of whom may be tempted to flick channels, never to return," Javelin has also seen many changes, although not as recent as the False Start rule. It was initially part of the pentathlon which was introduced in the Olympics in 708 BC and held for the first time in Athens in 1906. In the 1950s there was a new dimension in construction of the Javelin; Dick Held (brother of former record thrower Bud) began to apply basics of aerodynamics to the shaping of the shaft and the head of the Javelin. This change came about because of the great concern of the constant flat landings and dangerous in-flight deviations of the Javelin. This was shown by the athletic fans and the members IAAF. ...read more.

In the 1970s anabolic steroids was used mainly in sports such as hammer throw and discus, In 1980 Ben Johnson was the most famous athlete to be tested positive for drugs this brought drug testing in athletics to the world's attention, and questions were being asked as to how many other athletes were taking drugs to enhance their performance. The likes of Flo Jo of the 1984 athletics in Los Angeles, who was at the time the most successful 100m runner. Drug testing was primarily done by testing an athletes urine, and in some cases they may take a blood sample. During the 1970s and 80s the detection of drugs in athletes was complicated by the fact that there were some countries i.e. Soviet Block and East Germany were known to condone the taking of drugs in athletics. During its first years of existence World Anti-Doping Agency (WADA) has reached agreements with 34 International Sports Federations governing Olympic summer and winter sports to conduct unannounced, out-of-competition tests. ...read more.