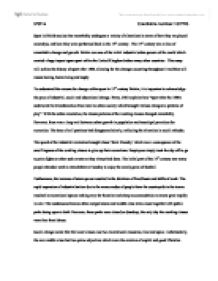 Sport in British society has remarkably undergone a variety of alterations in terms of how they are played nowadays, and how they were performed back in the 19th century. The 19th century was a time of remarkable change and growth. Britain was one of the initial industrial urban powers of the world which created a huge impact upon sport within the United Kingdom before many other countries. This essay will outline the history of sport after 1800, allowing for the changes occurring throughout it and then will assess boxing, horse racing and rugby. To understand the reasons for change within sport in 19th century Britain, it is important to acknowledge the pace of industrial, social and educational change. Barry, 2002 explains how "sport after the 1800s underwent the transformation from rural to urban society which brought various changes to patterns of play". With the urban revolution, the leisure patterns of the working classes changed remarkably. However, there was a long wait between urban growth in population and municipal provision for recreation. The base of evil pastimes had disappeared slowly, reflecting the alteration in social attitudes. The speed of the industrial revolution brought about 'Saint Monday' which was a consequence of the unwillingness of the working classes to give up their recreations. ...read more.

"In theory, the finely calibrated division were created to prevent mismatches; in practice, they have the felicitous effect of creating many more 'champions' and many more 'title shots'"(John Sugden "Boxing and Society" pg 31). However, the continuity of boxing in the 19th century still included the main principal of inflicting a sufficient amount of physical damage to an opponent to win a bout. Outside the ring, gambling was still rife in the sport with potentials of big winnings if the higher class folk such as lords had good participants fight for them. Another aspect of continuity in boxing was the environment in which boxers fought in. The fighters in the 19th century were still surrounded by rowdy spectators which created a sense of hostility around the setting. Lastly, the social aspect of boxing remained within the sport. The working class men saw boxing as an outlet from the hard shifts undergone at the factories and could enjoy a social drink. With regards to horse racing, there were many changes within the 19th century. The variety of races were expanded and specific roles were assigned for certain people on the race course e.g. ...read more.

The educational system was profound upon sport in 19th century Britain. It was not until 1890 when Baron de Coubertin revisited the Rugby School where Thomas Arnold was the headmaster, did his dream to revive the Olympics and globalise sport come true. He saw how sporting principles in British schools, muscular Christianity and athleticism were a good way to re-build the youth of France after the defeat in the Franco-Prussian war. His take on sport in Britain drove him to form the International Olympic Committee in 1894. In conclusion, sport within Britain in the 19th century evidently grew along with growth of the United Kingdom and the change from small towns to large industrial cities was like the change from early 19th century football to the rationalisation and formation of professionalism and the Football Association. The festivals and past times of playing sports in any street were given a purpose and designated area in the 19th century. The United Kingdoms initial reluctance to teach sport in schools was eventually turned around and seen as a perfect way to promote healthy living. Not only did sport in 19th century Britain create much change, much of its continuity is evident through the people's passion to not let work control their life and pursue sporting events even though sometimes it wasn't in their free time. ...read more.