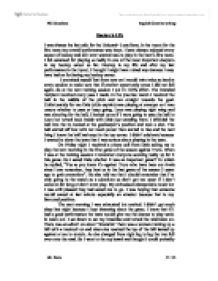 Hockey is Life I was always the last pick for the Liskeard- Looe lions. In the tryout for the first team my overall performance was inept. I have always enjoyed every aspect of hockey and all I ever wanted was to play in the men's first team. I felt ashamed for playing so badly in one of the most important chapters in my hockey career so far. Hockey is my life and after my last performance in the tryout, I thought I might have ruined any chances I may have had on furthering my hockey career. I promised myself that from now on I would train twice as hard at every session to make sure that if another opportunity arose I did not fail again. So at the next training session I put in 110% effort. The intended recipient received every pass I made. In the practice match I received the ball in the middle of the pitch and ran straight towards the goal. Unfortunately for me Dale (club captain) was playing at sweeper so I was unsure whether to pass or keep going. Leon was playing right wing and was shouting for the ball, I looked up as if I were going to pass the ball to Leon but turned back inside with Dale just standing there. I dribbled the ball into the D, looked at the goalkeeper's position and took a shot. ...read more.

When we arrived at the Astro-Turf there was no other team members present. So we got a ball and passed to each other while running around the pitch. We were half way through our second lap when the rest of the team arrived we went over to where our team had setup to talk about tactics and formations etc. As everyone got kitted up the umpire came over to tell us that the match would be starting in fifteen minutes. Dale had a quick count up and found out that Neil who plays up front had not shown. He came over to where I and the four other substitutes were standing and asked if any of us play up front. That is my favoured position but it is also Robin's who has played in the first team before. So Dale said that one of us play in the first half and the other play in the second. I didn't really mind what half I played in as long as I played. So I said to Robin you go on first. I thought that if I go on in the second half then if the team is losing or if it's a draw if we win I would have played a part in the victory. The players from both teams got into their positions and the umpire blew the whistle. The game started off very scrappy with both teams giving the ball away far too easily. ...read more.

Nick put his stick next to the ball took one look at the keeper and placed the ball sweetly into the top corner. When the match restarted there was three minutes remaining on the clock. Both teams were playing for the draw when their number 10 broke into our D and pushed a lovely shot heading straight towards the bottom corner. Some of the players from Truro were walking back into their half because they thought it was a goal. Well so did I to be honest but Gash didn't and made a lovely block on the line he ran the ball out to the right looked up and rocketed a ball down towards me. I knew that there was a defender behind me so I disguised my movement as if I were going to stop the ball then changed it at the last minute and flicked the ball over his stick. That usually works about one in ten tries so I knew I was clean through on goal. I reached the top of the D and the keeper was already charging out at me I knew that if I tried a shot from hear he would absolutely annihilate me. So as he dived down to obtain the ball I flicked it over him and straight into the back of the net. The whistle sounded and I couldn't believe it. I had won the game. It was like a rite of passage ....... My dream had come true. Phil Oxenham English-Creative writing Mr. Poole 11-V3 ...read more.