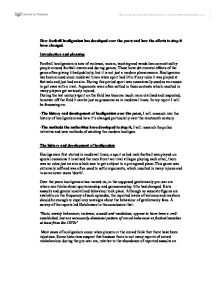 How football hooliganism has developed over the years and how the efforts to stop it have changed.

How football hooliganism has developed over the years and how the efforts to stop it have changed. Introduction and planning Football hooliganism is acts of violence, r****m, taunting and vandalism committed by people around football events and during games. These have detrimental effects of the game often giving it bad publicity, but it is not just a modern phenomenon. Hooliganism has been around since medieval times when sport had little if any rules it was played at festivals and just had an aim. During this period sport was occasionally used as an excuse to get even with a rival. Arguments were often settled in these contests which resulted in many players get seriously injured. During the last century sport on the field has become much more civilised and respected, however off the field it can be just as gruesome as in medieval times. In my report I will be focussing on: -The history and development of hooliganism over the years, I will research into the history of hooliganism and how it's changed particularly over the nineteenth century -The methods the authorities have developed to stop it, I will research the police initiative and new methods of catching the modern hooligan. The history and development of hooliganism Hooliganism first started in medieval times, a sport called mob football was played on special occasions it involved the men from two rival villages playing each other, there was no rules just an aim which was to get a object to a pre-agreed place. ...read more.

a form of punishment for spectators who misbehave themselves, involving the necessity of such offenders having to report on subsequent match days at a place and time away from the ground, should be strongly supported." It was also felt that: "... it is desirable that the punishment of convicted offenders should match the seriousness of the offence." The Lang report was one of the first reports to not only investigate why hooliganism occurred, but measures to stop it from occurring in the future it reported that: "There can be no doubt that the consumption of alcohol is an important factor in crowd misbehaviour" In more recent reports hooliganism has not only been committed outside or in the stadium. Under cover operations have revelled that hooliganism has become more organised where the ringleaders of sets of troublemakers on opposing sides have been in contact with each other and meet at a predetermined destination to fight. The advantage of this for them is that there wont is police patrolling that area so they can get away with it. The methods the authorities have developed to stop it, The approach taken by the British authorities to reducing football hooliganism has been largely increasingly sophisticated policing, surveillance and monitoring techniques, segregation of fans, restrictions on alcohol etc. The British Government has also introduced specific legislation to cover acts of 'hooliganism'. Such measures are common elsewhere in Europe, the German, Dutch and Belgian authorities, in particular, have been more proactive in their approach to the problem. ...read more.

This will also increase the popularity of the sport as more families will come to watch the sport introducing a new generation of football lovers who wont be interested in hooliganism, just in the sport. Appraisal of study The problem with my project was that as I choose the subject matter of hooliganism. It was very hard to find facts and figures to back up my points all I could find to prove my points were discussions and reports about this study. Though these reports were written by experts in this field, they too had to work in the same conditions without facts to back up what they were saying, so I am only going on what they believe and they cannot prove what they are saying to be true. So if I were to improve this project I would have to get some data to prove my theories to be correct. If I were to research in this field I would set up a few tests I would go to two football stadiums renowned for hooliganism and in one of them I would ban any alcohol and in another stadium I would make it freely available. Then over the season I could do some surveys such as comparing the number of assaults in and around the stadium on match days. I could also conduct a survey. Another thing I would research into would be how certain people from different countries or cultures are more or less likely to become violent at a football match. ...read more.