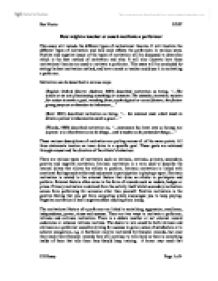 How might a teacher or coach motivate a performer?

How might a teacher or coach motivate a performer This essay will include the different types of motivational theories. It will illustrate the different types of motivation and how each affects the performers in various ways. Positive and negative issues of the types of motivation will be discussed to determine which is the best method of motivation and why. It will also illustrate how these motivational theories are used to motivate a performer. This essay will be concluded by stating the best motivation method, and how a coach or teacher could use it in motivating a performer. Motivation can be described in various ways: (English Oxford Shorter Addition 1993) described motivation as being, "...The action or an act of motivating something or someone. The stimulus, incentive, motives for action towards a goal, resulting from psychological or social factors; the factors giving purpose or direction to behaviour...." (Kent 1994) described motivation as being, "... the internal state which tends to direct a person's behaviour towards a goal...." (Woods, 1998) described motivation as, "...motivation has been seen as having two aspects: it is what drives us to do things...and it makes us do particular things...." ...read more.

In tennis once a well-known performer has retired they continue to play even when they have earned enough money in there life time e.g. John McEnroe. They continue playing out of enjoyment. Some football teams seem to continue playing just for rewards, such as Man United who pay their players to perform well. If their performance decreases too much then a player can be benched. This pressurises the athletes to perform, creating a job like situation for the players. I believe that there is no best method of motivation a coach or teacher can use on a performer. This is because when you start a particular sport, you do it for fun, but gradually as you get better rewards begin to be offered. Thus resulting in the performers motivation coming more from extrinsic than intrinsic motivation. If the performer wins a competition it will have a positive affect on them intrinsically as well as extrinsically, as the performer will fell good about the reward as much as he feels good about how much effort was concerned in obtaining the reward. There has to be a balance, as if it is to extrinsically motivated their will be no enjoyment competing in the sport, therefore the performer will get bored and quit. Ben Venter 5/2/07 P.E Essay Page 1 of 4 ...read more.