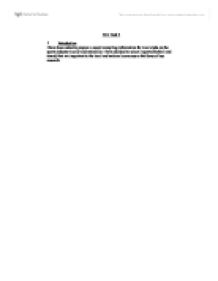 I have been asked to prepare a report compiling information for local clubs on the sports industry locally and nationally. I have decided to select 2 sports (football and tennis)

IVA Task 5 1 Introduction I have been asked to prepare a report compiling information for local clubs on the sports industry locally and nationally. I have decided to select 2 sports (football and tennis) that are important to the local and national economy as the focus of my research. Football History of football Ball games were first played in Egypt as early as 1800 BCE. However there are claims that suggest ball games were played even earlier in Ancient China, maybe as early as 2500 BCE. There is evidence to show that ball games in Egypt were linked to fertility rites and religious ceremonies. These ball games involved large numbers of people and records indicate that these games were sometimes used as an exercise to till the soil. The game of football generally flourished in England from around the 8th Century onwards. The game was incredibly popular with the working classes and there were considerable regional variations of the game throughout the country. Games were normally violent and disorganised affairs with any number of players - it was not uncommon for 1000 people to play in a single game. By the 11th Century, games were often played between rival villages and the 'pitch' could be an incredibly large area. The 'pitch' was not a defined size with a parameter, but included streets, fields, and village squares. ...read more.

History of Tennis Tennis originated from a 12th century French game called paume (meaning palm); it was a court game where the ball was struck with the hand. Paume evolved into jeu de paume and rackets were used. The game spread and evolved in Europe. In 1873, Major Walter Wingfield invented a game called Sphairistik� (Greek for "playing ball) from which modern outdoor tennis evolved. Games of racket and ball (including real tennis in Great Britain, royal tennis in Australia, and court tennis in the United States, all of which are the same game and played indoors) originated from a 12th and 13th century French handball game called jeu de paume (game of the palm). In 1873, Major Walter Wingfield invented a game called sphairistik�, from which modern outdoor tennis evolved. - Encyclopedia Britannica http://inventors.about.com/library/historyoftennis Scale and Economic of Tennis Tennis is a very popular sport and is played all over the world and is played by very many different people. Tennis is played and watched by people who are interested in playing tennis or just interested to watch the game. The main governing body for tennis is the ITF (International Tennis Federation) which is made up of 202 tennis associations which help with the running of the game and the rules and regulations. ...read more.

J. Armitage 1980, the Origins of Sport. Industrial revolution Many matters were rasied when the industrial revolution took place and there are also many issues that stand today. The industrial revolution took place in the 1700 and is still around today 2007, that is over 300 years that these issues arise time and time again some of the issues are stated below. 14 or 15 hours a day in a factory, there is precious little time left for anything other than eating and sleeping. Whole generations of workers existed in this way before the law was changed to make their lives a little easier and the pursuit of knowledge and happiness less daunting. Demands for a shorter working week began to gather pace in 1832. Michael Sadler and Richard Oastler, champions of the fight for the 10-hour day, were present at a massive meeting at Campfield in Manchester as children sang a plea for shorter hours. First success came with the Factory Act of 1833, which prohibited the employment of children under nine in cotton mills and restricted the hours that older children could work. It also prohibited night work for youngsters and made educational provisions. Football match ... already people were watching sporting events as well as playing Sport in the industrial revolution was ?? ?? ?? ?? ...read more.