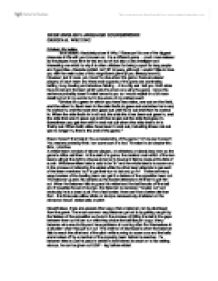 GCSE ENGLISH LANGUAGE COURSEWORK: ORIGINAL WRITING Cricket: My hobby I love cricket! Absolutely adore it! Why ? Because it is one of the biggest pleasures in life with your trousers on. It is a different game - much more relaxed as the players have time for tea and lunch but also a very intelligent and interesting one which is why it is often criticised for being a sport for lazy people and hypocrites. Absolute rubbish, isn't it? Anyway, although I wouldn't like to bore you with the weird rules of this magnificent game (if you already know it). However, just in case you haven't a clue about the game: there are eleven players on each team and three main aspects of the game are dominating batting, busy bowling and laborious fielding - it is a big ask I tell you. Both sides have to bat and the team which gets the most runs wins the game. I know the sentence probably doesn't make sense to you so I would explain in a bit more detail but not in my words but in the words of my cricket coach. "Cricket is a game in which you have two sides, one out on the field, and the other in. Each man in the side that's in goes out and when he is out, he comes in, and the next man goes out until he is out and then he comes in. When the side that's in is all out, the side that has been out goes in, and the side that was in goes out and tries to get out the side that goes in. Sometimes you get men still in and not out when thw side that is in is finally out. When both sides have been in and out, including those not out yet no longer in, that is the end of the game." ...read more.

There are two distinct forms of cricket - limited overs cricket and unlimited overs cricket. In limited overs cricket, there are a set number of overs - an over a series of six bowls bowled by a bowler at a time. For example, in a typical one day game, there would be 50 overs which the bowling side would have to bowl but this varies to about 20 overs. This type of cricket is played by most amateur cricket clubs as it is neither time consuming nor too expensive. Professional playing county cricket also play this. However, unlimited overs cricket requires cricketers of higher ability and technique - tough guys who can concentrate on a cricket field for up to five days without being distracted by the wandering birds, the critical spectators or the voluptuous ladies in the crowd if they are lucky. Contrastingly, I would like to inform you of my own cricket - my own game. I play cricket every lunch time in school and at weekends for Stourbridge Cricket Club in the summer. Being a spin bowler I can get frustrated quite easily as it easier for a batsman to drive, pull or loft me because I bowl at a much slower pace - actually two times slower than a fast bustling fast bowler, giving the batsman ample time to make decisions and encounter the ball. Their weapons are fingers, flight and deception when imparting spin on the ball instead of sheer pace, bounce and swing which the faster bowlers use being the tall giants of cricket and sometimes bullies too - look at the Aussie Glenn McGrath's intimidating attitude for example - no offence to any proud Australian reading this. Like most world famous sports, cricket has never been short of legendary characters - not just players, but also their mentors umpires. In my opinion, the wizard of cricket was undoubtedly Sir Garfield Sobers of the West Indies. ...read more.

Richie Benaud of Australia and Tony Greig of England are two very different commentators but are thought of as the best ever in the business as they have made the slow game of cricket seem very interesting to millions across the world still keeping their interest in this game. Benaud's famous phrase "Thanks the name of the co-commentator. Good Morning Everyone." with his laid back manner of commentary and high praise for deserving players is imitated by many other commentators. Whereas, Greig's animated tone in his comments on the television have contributed over the years in attracting the younger generation to the game as they are used to the "cat and mouse" commentaries of football, basketball and rugby. Indeed. It has been said that the amount you know about cricket is inversely proportional to a greater understanding of how to play. The popular American entertainer Andy Williams, on seeing his first cricket match, was completely intrigued by the bowlers, who spend a great deal of time rubbing the ball up and down on their groin! I know this doesn't sound very straight but you would be surprised to know that other neutral observers would be advised to follow his example and worry not about the rules, teams or results but instead treat the whole experience as a strange and fascinating ceremonial ritual. I am talking cricket - my biggest passion in my life. Therefore I can instinctively go on forever but would finally like to conclude that it is the commitment of the devoted and jubilant players and the jovial crowds along with the commentaries of golden voiced and silver tongued people like Tony Greig as well as the rivalries of old friends and enemies accompanied by the just demeanour of the umpires which makes the prodigious game of Cricket a pleasure to watch or play if you are lucky enough . . . ...read more.