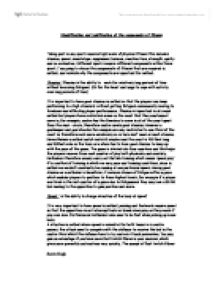 Identification and justification of the components of fitness

Identification and justification of the components of fitness Taking part in any sport requires high levels of physical fitness this includes stamina, speed, somatotype, suppleness, balance, reaction time, strength, agility and co-ordination. Different sports require different components within there sport. I am going to discus the components of fitness that are required in netball, and validate why the components are important for netball. Stamina: 'Stamina is the ability to work for relatively long periods of time without becoming fatigued. (Or for the heart and lungs to cope with activity over long periods of time) It is important to have good stamina in netball so that the players can keep performing to a high standard; without getting fatigued consequently leading to tiredness and effecting player performance. Stamina is important in all round netball but players have restricted areas on the court that they can/cannot move in, for example, centre has the freedom to move in all of the court apart from the semi - circle, therefore centre needs good stamina. However a goalkeeper and goal shooter for example are only restricted to one third of the court so therefore work more aerobically so in turn don't need as much stamina. ...read more.

The amount of fast twitch fibres the body has is genetically determined. Strength: is the ability of a muscle or muscle group to overcome force or resistance' There are three types of strength: Explosive strength, static strength and dynamic strength. Static strength: 'is described as the maximum force that you can exert over one single contraction' This is where there is little movement at the limbs and your muscle length contains constant. This is not applied to netball as we rarely need to hold a fixed position using strength, you might hold a position in marking you player however there is no opposing force like there would be in a rugby scrum for instance. Explosive strength: ' is described as the maximum force used in one movement with a combination of speed and force' Performers with a high amount of fast twitch fibres will have better explosive strength. This component applies to netball, as players need it for defending when using the maximum force of your muscles in your leg to defend a shot, defenders also need it so that they can jump for every rebound at the highest point and therefore clear the ball from the area. ...read more.

the players have to react quickly to grab the ball. Netballers also need good reaction time to intercept passes made in the centre pass to stop the opposition counter attacking. Balance- 'the ability to remain equilibrium when stationary or moving' Staying equilibrium is important, keeping your landing foot (for footwork) still so that the umpire doesn't pull you up for it. Furthermore shooting in netball requires being relatively equilibrium and when defending it is important that you try and keep balanced when marking a player or leaning over at full stretch, holding the balanced position otherwise you get penalised for it and have to stand by the players side as a punishment and the shooter gets a free pass or shot (if shooter). Summary Components of fitness can be split into two types 'heath related fitness' fitness needed to take out everyday activities and still have enough energy left for emergencies' these are needed for everyday life and for all. The other is 'specific fitness' these are more skill related which is therefore more sports specific, such as agility, reaction time. Netball requires most of the components from both types of fitness. ?? ?? ?? ?? Sunita Singh ...read more.