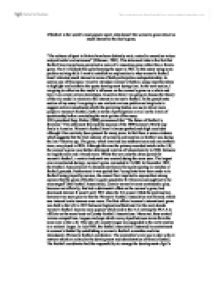 If football is the world's most popular sport, why doesn't the women's game attract as much interest as the men's game.

If football is the world's most popular sport, why doesn't the women's game attract as much interest as the men's game. "The cultures of sport in Britain have been distinctly male, rooted in masculine values and patriarchal exclusiveness" (Whannel, 1991). This statement links to the fact that football has always been perceived as more of a masculine game rather than a female game. The F.A backed this up by banning the sport in 1921. In this essay using some problem solving skills I want to establish an explanation to why women's football hasn't attracted much interest in terms of both participation and spectatorship. In section one of this essay, I want to introduce women's football, using important dates to highlight and reinforce the sports development during time. In the next section, I am going to reflect on the media's influence on the women's game as a whole and how it can create certain stereotypes. In section three I am going to discuss the theory of the role model in relation to the interest in women's football. In the penultimate section of my essay I am going to use evaluate various problem solving tools to suggest certain amendments which the governing bodies can use to attract more people to women's football, both in terms of participation as well as the levels of spectatorship before concluding the main points of the essay. FIFA president Sepp Blatter (1999) pronounced that '"the future of football is feminine." This statement followed the success of the 1999 women's World Cup finals in America. Women's football hasn't always sparked such high accolades although it has certainly been present for many years. In fact there is some evidence which suggests that the first instance of women's participation in football was during the late Victorian age. The game, which involved one southern team and one northern team, was played in 1895. Although this was the primary recorded match in the UK, the women's game was further developed in terms of internationally in 1920, between an English team and a French team. ...read more.

The main point acceptance of women's sport will only occur when women's physicality is associated with traditional, stereotypical beliefs regarding the female's body and its 'proper' use-in graceful and aesthetically pleasing ways (Greendorfer, 1990). Moreover, women in sports such as gymnastics and figure skating, which are seen as more 'feminine', have greater social acceptance and media coverage. 'If sport is not seen as a feminine pastime, football is even less so. As we are often told, it is a man's game. (Gadgil, A., 2003). This opinion is held by many and is certainly created by media's portrayal of women footballers. The media can also however have a beneficial influence on the perception of women footballer, for instance, the creation of role models. There is a distinct lack of role models in the women's game in the UK; however this is different in America. After the Women's World Cup in 1999 which was set in America, a majority of players in the U.S squad were made households names, made appearances in advertisements and also received sponsorship. A role model is a very important tool in order to attract young females to football. It is a person who is regarded by others as a good example to follow (Collins dictionary 2003). The English equivalent to women's football hasn't created many female role models on the pitch; however, it has seen certain females in a position of authority within football. One early example of women in positions of authority in the male's game was Annie Bassett, who became the first senior female Marketing Executive of a professional football club in 1987. Using my previous knowledge there are only a couple of females which come to mind when I think of role models in connection with football. Firstly Kelly Smith, who is currently playing football for England and a team in the U.S, she was the first English female to be transferred to America. ...read more.

Ultimately televised sport and news reports should provide more coverage of existing women's sports. The female game shouldn't be treated differently to the men's game; moreover male officials in the women's game are very strict when it comes to physical contact. There should be fines and bans available to individuals who uses derogatory or s****t language towards the women's game. Also sportswomen shouldn't be referred to as 'girls' just as sportsmen aren't referred to as 'boys.' Television networks should commit themselves to more equal amounts of coverage of women's football, especially during regular season. The amount of resources and technical and production quality as well as equipment should be equivalent to the coverage of the men's game. Avoiding the issue of the media for the moment, the women's game should evolve from its current amateur status to a professional league. The profile of women's football in America has been raised over recent years and there are positive signs which could encourage the English to adopt the same policies. Talking to American sponsors, marketing and media is another option for the F.A, as they need to explore different ways in which they can introduce a professional status, without the prospect of failure. Top football managers in England and even some players have remarked that women have no place in the game as players or even as spectators. But attitudes are changing and with more exposure and sponsorship for the women's game, progress will be made. Major changes are being made both at elitist level and grass root levels of the game. Ultimately, one of the major advantages available to the F.A, is the tremendous marketability of football at present, therefore all the governing body has to do for the women's game is to improve coverage and exposure to it, therefore in the future the game may be able to compete, both in terms of economic status and the interest generated, with the male's football. ...read more.