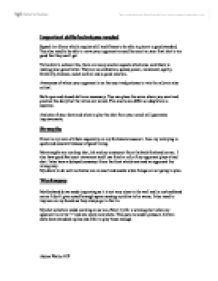 Important skills/techniques needed Squash is a Game which requires skill and fitness to be able to play at a good standard. You also need to be able to move your opponent around the court so your final shot is too good that they can't get. To be able to achieve this, there are many smaller aspects which also contribute to making your game better. They are co-ordination, speed, power, movement, agility, flexibility, balance, racket control and a quick reaction. Awareness of where your opponent is on the court and patience to win the rally are also critical. Both open and closed skills are necessary. You can place the serve where you want and practice this daily but the rallies are varied. The courts can differ so adaptation is essential. Analysis of your shots and when to play the shot from your coach will guarantee improvements. Strengths Power is my main attribute especially on my forehand crosscourt. Also my volleying is quick and accurate because of good timing. ...read more.

My boasts now die in the corner and don't go in the tin much. The match has improved my shot selection so I now move my opponent further around the court. My core stability has improved a lot so I can twist, turn and move better on to the ball. My volley, lob, crosscourt and drop shot have just become more consistent and accurate. Most of all my stamina has improved a lot so I can now play my best for the full five games instead of three. But I still sometimes get slightly close to the ball in my backhand corner, causing the ball to come back towards me and give away points. Views of 6 week programme I think that the training programme went very well, with all the areas that needed improvement being improved upon. The amount of training I did a week was perfect; I could give 100% in each session because the training was not every day, giving me a rest. The training was also specific for the areas which needed improvement. My coach also said that my all round game has improved, so the training programme has been a success. Adrian Waller 10P ...read more.