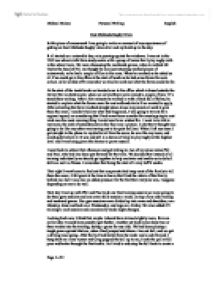 In this piece of coursework I am going to write an account of my experiences of getting an East Midlands Rugby Union trial and my build up to the day. It all started on a miserable day, rain pouring against the windows

East Midlands Rugby Trials In this piece of coursework I am going to write an account of my experiences of getting an East Midlands Rugby Union trial and my build up to the day. It all started on a miserable day, rain pouring against the windows. I was sat in the TGC our school sixth form study centre with a group of mates that I play rugby with in the school team. We were discussing the weekends games, when in walked Mr Taylor the head of P.E. we thought he was just returning marked pieces of coursework, as he had a couple of files in his arms. When he reached us he asked us all if we could go to his office at the start of lunch as he had some forms for us to collect, as he walked off I remember we tried to work out what the forms could be for. At the start of the lunch break we headed over to his office which is based outside the Driver Hall on bottom site, when we arrived there were already a couple of year 11's stood there waiting. ...read more.

Next day I met up with Phil and Paul to do our first training session we were going to do three gym sessions and one extra skills session a week, on top of our club training and weekend games. Our gym sessions were divided up into arms and shoulders, on a Monday, chest and back on a Wednesday, and legs on a Friday. We also added CV training to each session and occasionally made slight changes. Looking back now I think that maybe I should have trained slightly more, from an earlier date I would have possibly got further. Another set back came about two or three weeks into the training, during a game for my club. We had been playing a tough game against Marlow, when I had jumped and taken a line out ball, and we got a driving maul going. After the ball had broke from the make and a ruck formed I hung back as a nine runner and Greg popped the ball up to me, I took the pull at full pace and broke through the first tackle. As I tried to side step the full-back to create a gap to the line my ankle twisted beneath me. ...read more.

This game was even harder than the first. I got another boot to the face leaving stud marks all down the right hand side and across my eye. I also got shoed down my back for killing the ball. At the end of that game I went and spoke to both of the coaches that had been analysing my performance, they both said that I was a better flanker than lock, and that my technical skills were really good. They pretty much confirmed that I wouldn't be called back to the next round, because even though my skills and line out work was good, I did not have the size, weight and presence around the field, so basically I wasn't 'big enough'. I thanked them and after we had all been talked to we headed home. In the car we chatted about it, we all agreed that it had been an amazing experience, and we would work hard for the next season to go back again. After discussing it with my parents that night, I forgot about it for a few weeks, until I got the letter through. It confirmed what I thought that I wouldn't be going through, although I had a slight glimmer of hope that I might have been called back. ?? ?? ?? ?? Michael Haines Personal Writing English Page 1 of 2 ...read more.