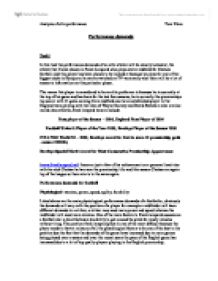 In this task the performance demands of an elite athlete will be closely looked at, the athlete that I have chosen is Frank Lampard who plays centre midfield for Chelsea football club

Performance demands Task1 In this task the performance demands of an elite athlete will be closely looked at, the athlete that I have chosen is Frank Lampard who plays centre midfield for Chelsea football club this player has been chosen to be looked at because he plays for one of the biggest clubs in Europe so he can be watched on TV very easily also there will be a lot of access to information on this particular player. The reason this player is considered to be an elite performer is because he is currently at the top of his game and has been for the last few seasons, he is currently the premierships top scorer with 11 goals coming from midfield also he an established player in the England team playing with the likes of Wayne Rooney and David Beckham who are also world class athletes, frank lampard honors include: Fans player of the Season - 2004, England Fans Player of 2004 Football Writer's Player of the Year 2005, Barclays Player of the Season ...read more.

Another factor may be a certain goal that the player wants to achieve for example pushing for an international call up for their country or qualifying for a European place. The other factor which has probably the largest affect on physiological performance demands is the advance in nutritional information for example most premiership clubs will have a qualified member of staff who focus's on nutrition this makes sure that the players are eating the right diets and eating the correct pre math meal so they are able to perform at there maximum. Psychological- concentration, motivation, performance anxiety, confidence Those listed above are the main psychological demands of a footballer, when playing football often a lot of goals are conceded due to a lack of concentration so it is vital that concentration is maintained throughout the game. Motivation is also a big factor of a players psychological performance demands this can go a long way in helping a team or individual to perform at their maximum for example if a team is more motivated than their ...read more.

midfielders that play a more defensive role this a tactic deployed by the manager to enable frank lampard to get forward and create opportunities or even score for the team. Technical- passing, shooting, dribbling, heading, turning Those listed above are technical demands for a footballer, mostly these abilities are natural and a big part of the reason if a player is an elite performer, a player is put into which technical ability they are most suited to for example a player who is good at dribbling and turning may be a right or left winger. Frank lampards main attributes are passing and shooting these attributes make him suited to an attacking midfield position as he can unlock defenses with his good range of passing and also he can finish if he is in the right position, frank lampards technical ability is among the best in the world so this is why it plays a big part in him being an elite performer. Sources used www.franklampard.net ?? ?? ?? ?? Analysis of elite performance Tom Yates ...read more.