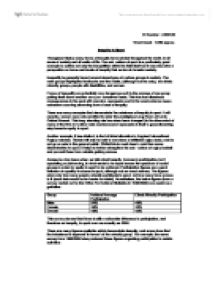 ID Number : A222453 Word Count : 1,550 approx. Inequity In Sport Throughout history many forms of inequity have existed throughout the world, in all areas of society and all walks of life. The sub-culture of sport is a particularly good example to outline not only the inequalities within the field itself but it may also offer a perspective on forms and levels of inequity that survive in broader society. Inequality is generally based around stereotypes of various groups in society. The main groups highlighted textbooks and the media, (although not the only), are ethnic minority groups, people with disabilities, and women. Forms of inequality are potentially very dangerous as it is the process of one group putting itself above another on a pre-conceived basis. This has had disastrous consequences in the past with coercion, oppression and in the most extreme cases ostracism occurring stemming from a base of inequity. There are many examples that demonstrate the existence of inequity in sport. Until recently, women were not permitted to enter the prestigious Long Room at Lords Cricket Ground. This long-standing rule has since been changed (to the discomfort of many of the M.C.C.'s older male members) and represents in itself a groundbreaking step towards equity in sport. Another example, if less distinct, is that of ticket allocation to England International Rugby matches. ...read more.

Significantly, coaches who make these decisions are generally white.' 'Sport & PE', Wesson, Wiggins, Thompson & Hartigan The last sentence is particularly important, as it leads to one of the key areas within sport that not only demonstrates inequity, but also ensures that inequity continues to exist into the future. Described by Coakley as 'the self-perpetuating coaching sub culture' (1994) it is the coaching and administrative roles in particular in which minority groups are noticeable by their absence. A fine example of this is the table below, showing figures from the Great Britain Summer Olympic Teams: Year % of Athletes % of Coaches Male Female Male Female 1976 73 27 96 4 1980 68 32 91 9 1984 68 32 96 4 1988 64 36 90 10 1992 61 39 92 8 These figures concisely show that at the highest level, although there has been a significant increase in the number of women representing Great Britain at the Olympics over a 16-year period, the number of women coaches has remained very low. If changes are to be brought about to reduce inequity in sport, these findings show that it is of significant importance to establish people from minority groups into managerial and administrative roles in order for a change to become permanent and ingrained in society. ...read more.

Aside from promoting equity and providing expertise to assist such projects, Sport England has also contributed �988,000 to the cause. As an organisation, Sport England is accountable to Parliament through the Secretary of State for Culture, Media and Sport. It is he/she who appoints members to the council of Sport England. Over and above the existence and influence of Sport England, the Department of Culture, Media and Sport has attempted to address the issue of inequity in sport. Basic sport and leisure legislations such as the obligatory requirement for the provision of libraries, playing fields and allotments, and optional additional leisure facilities have been introduced. Directly, government has affected sport and leisure in many ways, from its leisure policies before and after the introduction of the welfare state right through to the development and subsequent demise of Compulsory Competitive Tendering, designed to encourage competition financially for sports facilities maintenance and construction contracts amongst other things. Although initiatives and legislations such as these have affected the overall picture of sport participation, the projects that single out and tackle sports equity directly are done through Sport England. In conclusion, I believe it is fair to say that although the existence of inequity in sport is decreasing with government attempts to address the issue; the need still resides for changes to be made within society at a deeper, more fundamental level for true equity in sport to fully take effect. ...read more.