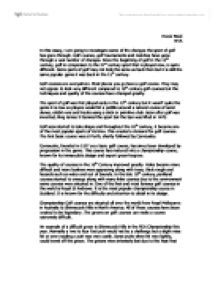 Investigate some of the changes the sport of golf has gone through.

Frazer Nicol W1A In this essay, I am going to investigate some of the changes the sport of golf has gone through. Golf courses, golf tournaments and matches have gone through a vast number of changes. Since the beginning of golf in the 15th century, golf in comparison to the 21st century sport that is played now, is quite different. Some parts of golf may not look the same as back then but it is still the same popular game it was back in the 15th century. Golf courses are everywhere. Most places you go have a golf course. They may not appear to look very different compared to 16th century golf courses but the techniques and quality of the courses have changed greatly. The sport of golf was first played early in the 15th century but it wasn't quite the game it is now as players would hit a pebble around a natural course of sand dunes, rabbit runs and tracks using a stick or primitive club. ...read more.

It is the most popular championship course in Scotland. It is known for the difficulty and attention to detail in its design. Championship Golf courses are situated all over the world from Royal Melbourne in Australia to Shinnecock Hills in North America. All of these courses have been created to be legendary. The greens on golf courses can make a course extremely difficult. An example of a difficult green is Shinnecock Hills in the PGA Championship this year. Normally a two to four foot putt would not be a challenge but a slight miss hit or over reading a putt was very costly. Some putts when hit very lightly, could travel off the green. The greens were intensely fast due to the heat that day; they had to water the green every fifteen minutes to stop the grass from burning. If we compare the greens now to what they were, the contrast would be great. Now the greens are cut "as low as they go" and are treated with the utmost care. ...read more.

The world was amazed by the success of this player who became the youngest player ever to win the Masters at the age of 21. Major Tournaments in the present day include The Masters, The British Open, The USPGA and The US Open. They have been around since the start of golfing tournaments. Golfing Competitions have players from all over the world turning up to play their sport: from Great Britain, New Zealand, the USA, Australia, Africa and many other locations. These competitions were in place to determine who the best golfer that year was and who had the most talent. They have always been very competitive. Players wanted to win every Major to prove they were the best. Golfing events have now rapidly increased; now there are events all over the world. Where as before there were very few events. Having looked at the contrast between the start of golf and the present day you can see how much the sport has changed, from prize money to the differences in courses. Golf has changed rapidly due to it increasing in popularity and taking the world by storm. Just as it was always intended. ...read more.