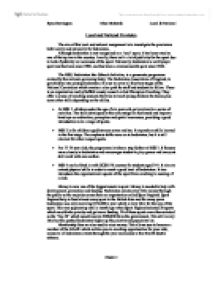 Investigate the provisions both locally and nationally for badminton.

Local and National Provision The aim of this local and national assignment is to investigate the provisions both locally and nationally for badminton. Although badminton is not recognized as a 'cool' sport, it has been rated as one of the top ten in the country. Locally, there isn't a lot of publicity for the sport due to lack of publicity or awareness of the sport. Nationally, badminton is an Olympic sport and has been since 1992, and has been a commonwealth sport since 1966. The BISI, Badminton Into Schools Initiative, is a grassroots programme created by the national governing body, The Badminton Association of England, to get children into playing badminton. It is set to cover all four key stages of the National Curriculum which creates a clear path for staff and students to follow. There is an organisation run by Suffolk county council called Champion Coaching. ...read more.

It also introduces the organisational aspects of the sport from coaching to running of a club. Money is now one of the biggest assets in sport. Money is needed to help with development, promotion and funding. Badminton creates very little money through the public so the majority comes from an organisation called Sport England. Sport England help to fund almost every sport in the British Isles and for many years badminton was only receiving �150,000 a year which is very little for the size of the sport. This was apparent up until a month ago when Sport England selected 20 sports which would take priority and get more funding. 10 of those sports were then selected as the 'Top 10' which would receive �280,000 from the government. This still is very little but has pushed badminton higher up the priority and popularity list. ...read more.

Wheelchair badminton is an Olympic sport, and it is also played nationally. There are county teams all over the country however Suffolk does not have the provisions for disabled badminton. Wheelchair badminton is a Para Olympic sport and is slightly different from badminton. The net is lower and the rackets shorter. The court is also slightly smaller. On the whole, badminton in Suffolk is average. Improvements could be made by the promotion of the sport. Either by flyer at the local sports centre or at schools, or by a representative of the BAofE visiting schools and clubs promoting the sport. Clubs for players with good but not brilliant skills are also hard to find in Suffolk. There are clubs for really good, strong players and clubs for beginners but none for players in the middle. Nationally, badminton has really good a provision. The pathway for elite players is excellent and the sport is of Olympic standard. In conclusion, locally the sport is ok but there could be improvements but nationally badminton is in the top ten sports in the UK. ...read more.