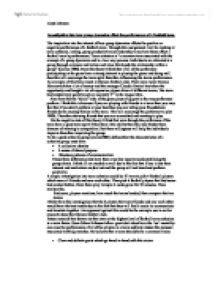 Investigation into how group dynamics affect the performance of a football team.

Investigation into how group dynamics affect the performance of a football team The inspiration into the interest of how group dynamics affects the positive or negative performance of a football team. Through this assignment I will be looking at team cohesion, loafing, group productivity and leadership to see how these affect a football team's performance. Team cohesion is "a common term associated with the concept of a group dynamics and is a two-way process. Individuals are attracted to a group through common motivation and value this bonds the relationship within a group" (Carron 1980).From this theory I think that if all of the performers participating in the game have a strong interest in playing the game and doing well then this will encourage the team spirit therefore influencing the teams performance. An example of this from resent is Chelsea football club. There new owner Roman Abramovich has a lot of money and the manager Claudio Ranieri has taken the opportunity and bought a lot of expensive players from all different teams. The team has bonded very quickly and are currently 3rd in the league table. Also from this the "social" side of the game plays a big part in the way performers perform. I think this is because if you are playing with friends in a team then you may feel that if you don't perform at your best then you are letting your friends/team friends down causing friction in the team. ...read more.

He believes that a team should have a common vision * Clear and definite goals which go hand-in-hand with this vision * Members who share their understanding of strategy and tactics * Great inner discipline (meaning they act professionally together) * Players with characteristics which complement each other * A good division of roles among the players, with all members treated equally * Players who put the common good before their own interests * Players who take responsibility for the whole team, with everyone accepting mistakes as long as people do their best (Sven G�ran Eriksson on Football, Carlton Books, 2000) The second theory that I am going to look into is the effects loafing have on the football team's performance. Loafing is "when an individual is working within a group weather their performance will be consistent or will decrease". When playing in a football game there are eleven players all sharing responsibility in the teams performance. From this I think that if every performer takes care or their own areas of responsibility and does this to the best of their ability then this should be a positive influence in the teams performance. A quote for this "individual commitment to a group effort, that is what makes a team work, a company work, a society work, a civilisation work (Vince Lombardi) ...read more.

An example of a good leadership is Roy Keane he shows 100% commitment, shows good relationship between players and is also respected. The negative side would have to be the fact the leader (captain) is one person and his views wont always match up with every players this may hinder the team cohesion and team spirit. Conclusion The aim of this assignment was to determine weather team cohesion, loafing, group productivity and leadership effects the way a football team perform. Whilst looking into team cohesion I found many things that affected what happens positively and negatively to the team. Such as motivation and common values and the way this changes the way the game is played and the bond of all players. My first theory proved to be successful while arguments could still be made about my theory. Loafing and group productivity combined together in this area. Not knowing much about each subject, while researching I found out about commitment and responsibility and the way this affects the game. The last point that I found very important to the way a group is controlled was leadership. I found the roles of the leader and how this influences the groups productivity and what good and bad points this brings to the group. Overall I think that as a group the performers must have a common motivation and the same values for the game, commitment and responsibility. Having these will improve group. ...read more.