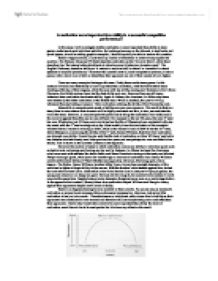 Is motivation more important than ability in a successful competitive performance? In this essay I will investigate whether motivation is more important than ability in team games, racket sports and individual activities. By looking at sources on the Internet, in text books and sports papers; as well as adding graphic examples, I should hopefully be able to answer this question. Before I begin however, I must build up a series of definitions in order to help explain the question. The Edexcel Advanced PE book describes motivation as the 'Drive to Strive', while Kent describes it as 'the internal state which tends to direct a person's behaviour towards a goal'. The English Dictionary describes ability as 'A natural or acquired skill or talent' or 'someone's natural aptitude or acquired proficiency.' Therefore this question asks if, under competitive pressure, a side or person with a lower level of skill or talent than their opponent can win if their mental drive is higher. There are many examples that argue this case. Firstly there are the team games. ...read more.

However the number of cases in which motivation overcomes ability in individual sports such as track events, swimming and boxing, are few and far between. In Athens last year the Americans ruled once more with athletes like Justin Gatlin and Shaw Crawford winning on the track, and Michael Phelps winning 6 golds, while just a few months ago no amount of motivation from Danny Williams could beat the sheer ability of Vitali Klitchko (see appendix). However, this being sport, it does happen. The Briton, Danny Williams, knocked Mike Tyson, former heavyweight champion of the world and a fighter of huge ability, to the canvas. With the bookies' odds stacked against him, he had the motivation to beat Tyson. Meanwhile in the 110m Hurdles final in last year's Olympic games, the young and unknown Liu Xang won gold. Not only did he win gold, he equalled Colin Jackson's world record at the same time. Despite being a junior champion Xang had never won on a world stage before. In the appendix the inverted U theory shows how motivation helped Williams and Xang to victory against their opponents despite lower levels of ability. ...read more.

Having the right level of motivation is too hit and miss. Say an athlete does have the perfect level of motivation, their opponent still has to have either a really low level or too much motivation for them to win, and that's if they even have the perfect level of motivation. The physiological 'fight or flight' hypothesis means that people with lower abilities than their opponents can become nervous and therefore lead to 'flight' meaning low levels of motivation, and even if 'fight' occurs, they could arouse themselves too much and still have a low performance. It is much easier for the team or person with a higher ability to win as they have to be in a real physical or mental state to lose. Obviously it can happen as some of the examples in the appendix show, but overall ability conquers motivation. If I were going into a sporting competition tomorrow, I'd much rather have the confidence of supreme ability than the worry for the need of motivation. Appendix Miss M. Sharapova bt. Miss S. William - 6-1, 6-4 Vitali Klitchko bt. Danny Williams 1st Xiang Liu ---------------- 12.91 2nd Terrence Trammel ---- 13. ...read more.