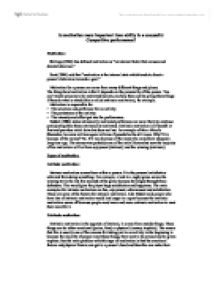 Is motivation more important than ability in a successful Competitive performance?

Is motivation more important than ability in a successful Competitive performance? Motivation: Stallings (1966) has defined motivation as "an internal factor that arouses and directs behaviour." Kent (1994) said that "motivation is the internal state which tends to direct a person's behaviour towards a goal." Motivation for a person can come from many different things and places. The thing about motivation is that it depends on the personality of the person. You can't teach someone to be motivated but you can help them out by giving them things if they do what is asked (this is called extrinsic motivation), for example. Motivation is responsible for: � The selection and preference for an activity. � The persistence at the activity. � The intensity and effort put into the performance. Biddell (1984) states intrinsically motivated performers are more likely to continue participating than those extrinsically motivated. Extrinsic motivation is of benefit at first and provides initial drive but does not last. An example of this a Micelle Shumaker, he earns millions upon millions of pounds but he still races. Why? It is because of the money? ...read more.

A certain level of arousal is needed to perform well. Too much arousal can make the performer tense, overanxious and this leads to making mistakes. The main aim for the performer is to reach the highest performance with the most motivation possible, or the optimum. So in a sport a coach will have to manipulate the athlete's level of motivation in order to maximise performance. The relationship between motivation and performance is very similar to the relationship between arousal and performance, the performer who is highly motivated will also be aroused. Another theory suggested is, Hull's drive theory. The Drive theory states that "performance increases with increasing levels of arousal, therefore the more arousal the better the performance." This is like the inverted U theory but it is slightly different. The graph shows what the theory means: Performance Arousal This graph shows you that to increase performance you need to increase the arousal. But there are exceptions. Because the inverted U theory says that performance only increases with arousal to a certain point. There is also more evidence to suggest that the inverted U theory is correct. ...read more.

The adaptations could be the weather, pitch conditions, speed on the ball, the position of the opponent etc. Therefore an open skill is never performed the same way twice. Closed skills are those that have no outside physical influences. They are the same every time they are performed. The performer will go through a learnt routine each time when performing the skill. Therefore a closed skill is easier to teach and to learn because it is the same and it won't change. An example of this is a basket ball free throw. There is no one blocking the ball so the player can concentrate and repeat all the learnt gross motor sequence. Conclusion: From all this I can conclude that motivation is important in a successful competitive performance but ability is just as important. This is because motivation is needed to perform the activity with enthusiasm and concentration but ability is needed to perform the skill well. If a person has lots of motivation but no ability they won't be good at the activity. But if a person has lots of ability and not much skill the activity will be done well but without much enthusiasm. So both motivation and ability are just as important in a successful competitive performance. Giles Walker. Word count = 1,493 ...read more.