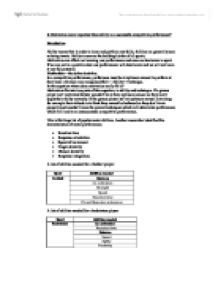 Is Motivation more important than ability in a successful competitive performance?

Is Motivation more important than ability in a successful competitive performance? Introduction Ability means that in order to learn and perform any skills, abilities are generally seen as being innate. Ability is seen as the building blocks of all sports. Motivation can affect our learning, our performance and even our decisions in sport. If we are not in a positive state our performance will deteriorate and we will not learn at our full potential. Motivation = the drive to strive. In a competitive performance, performers must be at optimum arousal to perform at their best, a formula was recognised Skill = Ability + Technique. In this equation where does motivation really fit in? Motivation fits into two parts of this equation, in ability and technique. If a games player isn't motivated he/she wouldn't be at their optimum arousal so they won't apply their ability correctly. If the games player isn't at optimum arousal in training for example their attitude is to think they cannot be bothered so they don't train properly and wouldn't learn the correct techniques which will deteriorate performance which will lead to an unsuccessful competitive performance. This is Stallings list of psychomotor abilities. Another researcher identified the characteristics of motor performance. * Reaction time * Response orientation * Speed of movement * Finger dexterity * Manual dexterity * Response integration. ...read more.

Achievement motivation is linked to personality. In sport, someone with extrovert tendencies would have a high nAch as they want to be noticed. Therefore person with an introvert will take the easy option as they don't want to failure or be noticed. Different types of motivation Intrinsic motivation arises, when an activity is pursued for its own sake, regardless what any one else says. This type of motivation is mainly used by individual games players for example in tennis at Wimbledon no coaching is allowed while they are playing so only concurrent or terminal feedback can be given. Extrinsic motivation stems from other people e.g. a coach in football for example; this can be through positive or negative reinforcement. This type of motivation is generally used in team games for example in football a coach trying to motivate his team from the sidelines or players such as the captain trying to motivate his team. Drive reduction theory This is referred to as the drive to strive. In a football context if a team is winning the premiership like Man Utd, their drive to win the league again will be reduced due to the lack of a challenge for example when they won the Champions League in 2000, the next year the were not motivated to be successful again due to lack of a challenge. ...read more.

Players have their own personal motivation factors which include: * Personal achievement * Challenge * Fitness * Contribution to the whole Group Motivation In groups people to work less hard than they do on their own, because individuals lessen their effort when they are part of a group. This loss of performance is known as the Ringlemann effect. There are many causes of social loafing in sport for example individuals perceived that other people in the group are working less than themselves. Social loafing can be minimised in sport by performers believing that their effort is identifiable by the team and people accept their own responsibility to the team's performance as a whole. Coaches recognised this and make it public to the team about loafing and can discuss this as a general issue, and private to those individuals who have misplaced their effort. Conclusion In conclusion I think that ability and motivation are as important as each other because without ability you wouldn't be able to give a successful performance and without motivation you couldn't give a good performance again. So without both you wouldn't be able to succeed at a sport. The equation skill= ability + technique, doesn't involve motivation but it can be put into the equation at ability and technique because without motivation you wouldn't be able to learn the correct techniques and without motivation you wouldn't be able to apply the abilities in a games situation. ...read more.