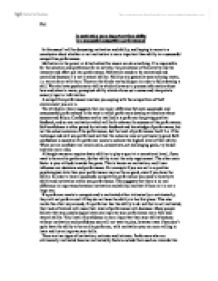 Is motivation more important than ability in a successful competitive performance? In this essay I will be discussing motivation and ability, and hoping to come to a conclusion about whether or not motivation is more important than ability in a successful competitive performance. Motivation is the power or drive behind the reason we do something. It is responsible for the selection and preference for an activity, the persistence of the activity and the intensity and effort put into performance. Motivation needs to be maintained and controlled because it is not a natural ability. Abilities are generally seen as being innate, i.e. we are born with them. They are the blocks we build upon in order to fully develop a skill. We also have psychomotor ability which allows us to process information about how and when to move, perceptual ability which allows us to sense and interpretate sensory input or information. ...read more.

If a performer wants to compete and is motivated either intrinsically or extrinsically, they will not perform well if they do not have the ability in the first place. This also works the other way around, if a performer has the ability to do well but is not motivated, their lack of interest will mean their level of performance will decrease. Many people believe that your psychological state can improve your performance more than your natural ability. Your level of confidence is more important than your ability because without motivation and confidence you will not want to play, however even if you don't quite have the ability to be an elite performer, with motivation you are more willing to learn and try an improve your skills. There are two types of motivation, extrinsic and intrinsic. Performers who are extrinsically motivated become motivated by factors outside them such as rewards like money, trophies and recognition. ...read more.

I have come to the conclusion that both ability and motivation are essential for a successful competitive performance, however one is a more important factor than the other. I feel motivation is slightly more important than ability, because without motivation you would not be playing in a competitive environment in the first place. Without motivation you would have the wrong attitude to be playing competitively. It is also true that without ability you would not be able to play competitively, however with motivation you can attempt to learn and become better by developing and improving your self-confidence through positive feedback. Performers who are motivated but don't have so much ability are often seen as having a more successful competitive performance than those who have the ability but are not motivated. This is because performances are often merited on effort as well as attainment, and there is also the possibility of someones performance improving if they are motivated, whereas if someone is not motivated but has the ability, their ability will not improve during the performance. Phil ...read more.