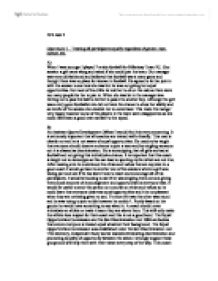 IVA task 2 Case study 1 - Treating all participants equally regardless of gender, race, culture, etc. A) When I was younger I played 7-a side football for Billericay Town FC. One session a girl came along and asked if she could join the team. Our manager was very old fashioned and believed that football was a mans game and thought there was no place for woman in football. He agreed to let her join in with the session to see how she was but he was not giving her equal opportunities. For most of the drills he told her to sit on the side as there were too many people for her to join in. When she was let in the manager was hinting not to pass the ball to her but to pass it to another boy. Although the girl was a very good footballer she did not have the chance to show her ability and as results of the session she decided not to come back. This made the manger very happy however some of the players in the team were disappointed as she could have been a good new member to the squad. B) As Assistant Sports Development Officer I would find this very concerning. It is extremely important that all coaches are trained well ethically. ...read more.

By creating these questionnaires it gives a chance to get regular feedback from the participants. This is vital as the feedback is coming from the people taking part in the sessions and it is important they are happy. I would also hold regular conversations with both the participants and their parents. This would give everyone a chance to get any of their problems across as well as things they are happy with. I think these ideas would help benefit both the manager and the participants and in turn the club and the community. Case study 2 - Catering for the needs of disabled people. A) Once when I went down to the local gym I saw a disabled man in a wheelchair going into reception. He went up to the reception desk however he was unable to reach the desk to talk to the woman. He asked her nicely if she could come round from the front of the desk to talk to him however she immediately dismissed him and said that the gym did not cater for disabled people. After further inspection it was found that there was no disabled access into the gym or the changing rooms. It was not possible for any wheelchair users to use the gym. The man asked whether there would be any future work to make the gym accessible for wheelchair users however she had no information and was very unhelpful. ...read more.

Teaching such a young age group he is setting bad ethics and values for future generations. If I was a coach for this team I would be teaching my players that they need to win a game fairly and not use 'dirty tactics' and play with gamesmanship. I would train my players well to be as good as this other player and I would teach them fair tactics that would work against the other team. Having one good player cannot make a team strong, they need a whole squad of good players and by creating this within my own team it would overpower the opposition. Before the match I would say remind my team about fair play and discipline. I would encourage them that they are good enough to win by playing their own game. I am against this manager's view as it is clearly unethical. It takes the winning at all costs attitude which we need to get rid of in sport. Vince Lombardi once said 'Winning is not the most important thing, it is the only thing' I do not agree with this statement and I would prefer to take an attitude such as sport England. They state that 'Sport England recognises that inequalities in sport exist. We are working to change the culture and structure of sport to ensure that it becomes equally accessible to all' This is a positive step forward towards fairness in sport and proves that my point is valid. C) ...read more.