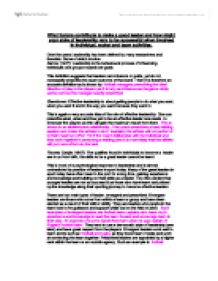 What factors contribute to make a good leader and how might your style of leadership vary to be successful when involved in individual, racket and team activities. Over the years Leadership has been defined by many researchers and theorists. Some of which involve: Barrow (1977): Leadership is the behavioural process of influencing individuals and groups towards set goals. This definition suggests that leaders can influence or guide, yet do not necessarily prescribe the exact outcome of the event. I feel it is therefore an accurate definition as is shown by football managers prescribing the ideal direction of play to the players yet it is only an influence as the game rarely works out how the manager exactly prescribed. Eisenhower: Effective leadership is about getting people to do what you want, when you want it and in the way you want because they want to. This is again a very accurate idea of the role of effective leadership. One can prescribe what, when and how yet to be an effective leader one needs to empower the players as this will gain the maximum result from them. This is shown in an athlete/coach relationship. If the coach prescribes a hard training session and orders the athlete to do it, invariably the athlete will not perform it to their maximum effort. ...read more.

Thierry Henry is often seen as an effective leader in Premiership football as he is confident enough to attempt passes and tricks which give the team confidence in themselves to also attempt such ideas. * Respect It is highly important to gain the respect of your team or individual when elected as leader. The performers look up to the leader for guidance and support and therefore if the leader has not achieved their respect the athletes are less likely to listen or take into consideration his views/opinions. This can be seen in championship football where Nigel Worthington lost the respect of his players and the fans alike when he made a series of decisions based around his gain rather than his team's. This resulted in a high lack of respect and a drop in performance and ultimately the loss of his position. * Commitment. All leaders should be totally committed to their club and country, always striving for the best and reaching for the maximum potential gain. An example of such is the NFL coaches who spend all hours of the day working with and around their team in order to give them the 'edge' in a highly competitive sport. * Vision An effective coach (leader) should have high standards for his team and be constantly bringing up ways of improvement and advancements within the individual or team. ...read more.

* Lack of learning - eg. A PE teacher is simply dictating what to do when performing the serve in badminton, yet not explaining why or how, hence the students do not learn. Democratic The leader discusses and consults with his group giving them the opportunity to input into the way the sporting activity takes place. He will explain why he is criticising or praising and gives the athletes a sense of empowerment. This style generally works in most situations and with most types of learner, yet is most effective with experienced individuals or teams with the knowledge to input useful ideas and thoughts. Advantages * Empowerment, the individual feels involved in the decision making process and is therefore more likely to participate to their maximum potential - a tennis coach asks their pupil if they think their training programme is appropriate according to how they are presently feeling. This gives them the chance to express their opinion and makes them feel involved in important decisions. * No rifts - Everyone in the team has an equal say and everyone is given equal opportunity, therefore there is no favouritism or dominant figures. * Enthusiasm - eg a hockey team is much more enthusiastic to train if they have been consulted on which days suit them the most, rather than being dictated to and told which days the have to train. ...read more.