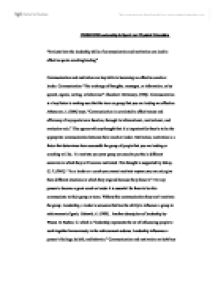 Leadership in Sport and Physical Education

PSDSD1020Leadership in Sport and Physical Education "Evaluate how the leadership skills of communication and motivation can lead to effective sports coaching/leading" Communication and motivation are key skills to becoming an effective coach or leader. Communication "The exchange of thoughts, messages, or information, as by speech, signals, writing, or behaviour" Chambers Dictionary (1996). Communication is a key factor to making sure that the team or group that you are leading are effective. Athanasios, L (2006) says, "Communication is correlated to effectiveness and efficiency of any sports team function, through its informational, motivational, and evaluative role." This agrees with my thought that it is important for they're to be the appropriate communication between their coach or leader. Motivation, motivation is a factor that determines how successful the group of people that you are leading or coaching will be. To motivate you your group you need to put the in different scenarios in which they will become motivated. This thought is supported by Rabey, G, P, (2001). "As a leader or a coach you cannot motivate anyone you can only give them different situations in which they respond because they chose to". For any person to become a great coach or leader it is essential for them to be able communicate to their group or team. Without this communication they can't motivate the group. Leadership, a leader is someone that has the ability to influence a group to achievement of goals. ...read more.

"To encourage effective communication, you must make yourself available for your athletes, creating a receptive and welcoming environment." Lynch, J (2001) the skill of listen is important if you are going to be able to communicate with a team effectively. Communicating can not be stressed enough in the importance in being an effective coach or leader. Without communication it would not be possible for a person to motivate his group that he/she is leading to meet the goals that have been set for them. This would result in the leader not being effective at is work. As communication itself is needed it self as we move on to a different necessity of motivation. Communication is vital for the success of any team that you are looking at we can see from the past where communication has broke down a group has failed to reach there goals or have even in ended up in being disasters such as Pearl Harbour, and the space shuttle disaster of 1986 Aaltio-Marjosolam, I and Takala, T (2000) these all ended in disaster due to the lack of information given be it from there leaders or from the group to the leader and we can see the importance of being good communicators in being successful. Motivation, motivation is to be looked differently from the normal view. It is not just the drive that a team or leader has. Instead it is made up of three different components these being more commonly known as the motivation construct. Steers, R. M, and Porter, L.W. ...read more.

Where as if you look at less successful managers such as Sunday league football you would see team coaches who are not communicated with the other players which is so important for success. Without this important communication it is almost certain that there will be no motivational qualities in the coach. We see the importance of a leader to be able to motivate his group so that they meet their targets. We see this in coaches he when there team maybe be down at half time he is able to take them to changing rooms and motivate his players into putting in better performances. This is a sign of an effective coach or leader. With a coach or leader who communicates will with the group of people you are able to see the confidence that a leader has from his group they will no that he is a could leader or coach and so will work at there best for him. We see these effective coaches or leaders everywhere you look when at school your teacher at school was a leader, your local coach can be an effective leader he my not look as good as those in the premiership but they can be just as effective as them with there team. So in looking at all of the effective leaders that there is in the world it is vital for them to have an appropriate level of communication and motivational skills. ...read more.