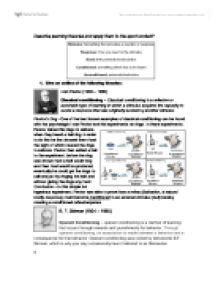 Describe learning theories and apply them to the sport context? Stimulus: Something that provokes a reaction or response Response: How you react to the stimulus Bond: link/connection/association Conditioned: something which has to be learnt Unconditioned: automatic/instinctive 1. Give an outline of the following theories: Ivan Pavlov (1849 - 1936) Classical conditioning - Classical conditioning is a reflexive or automatic type of learning in which a stimulus acquires the capacity to evoke a response that was originally evoked by another stimulus. Pavlov's Dog - One of the best known examples of classical conditioning can be found with the psychologist Ivan Pavlov and his experiments on dogs. In these experiments, Pavlov trained his dogs to salivate when they heard a bell ring In order to do this he first showed them food the sight of which caused the dogs to salivate. Pavlov then added a bell to the experiment, before the dog was shown food a bell would ring and then food would be produced, eventually he could get the dogs to salivate just by ringing the bell and without giving the dogs any food. Conclusion - in this simple but ingenious experiment, Pavlov was able to prove how a reflex (Salivation, a natural bodily response) could become conditioned to an external stimulus (bell) ...read more.

Hull believed that these drives and behaviors to fulfill the drives were influential in the evolutionary process as described by Darwin. However these arousal levels could also have a negative impact, if the levels of arousal were to high then the athlete could suffer from anxiety. If a beginner is trying to learn a new sport they need to have low arousal so they can focus on their given task however if the beginner has high levels of arousal they will struggle to focus on the task affecting their performance. Arousal can be a positive factor though for an experienced athlete because the skill will be habitual so they can deal with the arousal levels increasing performance. Hull's work has been criticized because he assumed that his laws of behavior, which were derived from experiments with rats, would account for all human behavior, including social behavior. While his theory is not considered a major contributor to current understanding of learning, nonetheless he contributed to the methodology for experimentation in learning theory. Social learning theories Albert Bandura: December 1925 - Social learning theory explains human behavior in terms of continuous reciprocal interaction between cognitive, behavioral, and environmental influences. The theory has often been called a bridge between behaviorist and cognitive learning theories because it encompasses attention, memory, and motivation. ...read more.

They need to control their levels of arousal and concentrate on were they are going to aim their shot. E.G: Free throw in basketball Just like a penalty kick, a free throw outs a lot of pressure on the player, a good basketball team would avoid putting a beginner on a free throw because their lack of experience and arousal levels would make it near impossible to gain a point. So instead they would use a much more experienced player were a free throw would be habitual so they can concentrate on handling their arousal levels and their shot. Theory Sport Examples Social Learning theory E.G unsporting behavior (football) In football we see players committing unsporting behavior in most matches, these are diving in the penalty area, if a player watching this notices that these acts can be beneficial players will copy however if they player who commits the offence is disciplined they will avoid copying them in their acts. E.G Descent We only have to watch a football match on TV to notice some of the so called role models giving descent to a referee or assistants, this unsporting acts of behavior can then be carried down into grassroots football. However if the referee disciplines the player - younger players will avoid copying this act. ...read more.