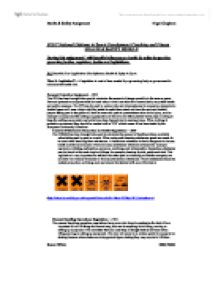 BTEC National Diploma in Sports Development Coaching and Fitness HEALTH & SAFETY MODULE During this assignment I will identify influences on health & safety in sport by governing bodies, regulatory bodies and legislations. P1) Describe Four Legislatives That Influence Health & Safety in Sport. What Is Legislation!? - A legislation is a set of laws created by a governing body or government to minimize the health risk. Personal Protective Equipment - 1992 The PPE has been brought into sport to minimize the amount of danger possible in the area or game. Personal protective equipment shall be used when a risk is not able to be controlled by any other health and safety measures. The PPE can be used in various jobs and circumstances for example a steward at a football game will wear a high visibility jacket to make them stand out from the rest, and football players taking part in the game will have to wear shin pads to protect there shins from injury, and for example on equipment the netting on goalposts now have to use either plastics hooks, tape or string to hang the netting up as metal cup hooks have been banned due to causing injury. When looking at protective equipment they should be marked with a "CE" which means it has been tested by the European Community Directives Control of Substances Hazardous In Health Regulations - 2002 The COSHH has been brought into sport to minimize the amount of health problems available when taking part in sport or events. ...read more.

When taking health and safety into consideration there is a lot of people who are involved in making sure that nothing goes wrong with the procedure or the act. Even though legislations have been passed there are still fatalities "In 2005-06 220 workers were killed and 361 members of the public fatally injures". Stafford - Brown H et al - BTEC National Diploma in Development Coaching & Fitness - 2007 pg 34 Legal Factors Before a legislation can be passed it will have to go through a structure of laws and through courts, each court deals with different types of charges and each court has its own importantance they are as follows; Magistrates Court - This court is the lowest level of court in England and Wales, these courts deal with minor offences (fines of up to �5,000 and imprisonment of up to 51 weeks) These courts have a tribunal and they consist of; 1. Justices of peace - these are appointed to keep the peace in the court 2. District judge - these are known as " judge" and they are the judge of the district court, these have limited authority to enforce the law Crown Court - This court deals with the more serious offensives e.g. murders. These courts deal with decisions or appeals from Magistrates court cases, they can also sentence people who have been to the Magistrates court when sitting in a crown court you will find different people to if you were satin a Magistrates court, these people consist of; 1. ...read more.

When a person takes on this law they are expected to use the same standards as a responsible parent would. Negligence - This law is when a person fails to meet the demands of a standard of care. This is not only for parents this can also be staff for example a supervisor not completing a full risk assessment of a situation and then a member of there company becoming injured or even dieing. If a person is found responsible for negligence they can be liable for being blamed for any injuries or damages. Regulatory bodies A Regulatory body is set up to help to make sure what they run is being ran properly and is fully health and safety checked these people will be informed of these procedures; 1. Police 2. Employers 3. Facilities In the UK the health and safety commission is in charge of health and safety regulations and to enforce these regulations a health& safety executive and local authorities are needed. Also when a facility s being used staff are required to inspect the facility first, and the health and safety officer will be required to make sure that the facility is being run properly, if the facility is not being run accordingly to the legislation then measures will have to be taken and if they are not met then the facility could face being closed down until it can meet the demands of the legislation ?? ?? ?? ?? Health & Safety Assignment Nigel Gleghorn Reece White 200419404 ...read more.