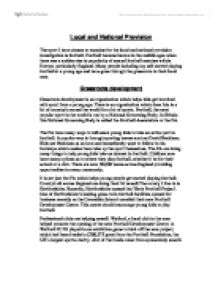 Local and National Provision The sport I have chosen to examine for the local and national provision investigation is football. Football became known in the middle ages when there was a sudden rise in popularity of annual football matches within Europe, particularly England. Many people including my self started playing football at a young age and have gone through the grassroots in their local area. Grassroots development Grassroots development is an organization which helps kids get involved with sport from a young age. There is an organization which does this in a lot of country's around the world for a lot of sports. Football, the most popular sport in the world is run by a National Governing Body. In Britain this National Governing Body is called the Football Association or the FA. The FA have many ways to influence young kids to take an active part in football. A popular way is through sporting heroes such as David Beckham. Kids see Beckham as an icon and immediately want to follow in his footsteps which makes them take up the sport themselves. The FA are doing many things to help young kids take an interest in football. ...read more.

Stages 5-6: 16 to 20 year old school leaver age groups Stage 7: 20+ the mature player example Stage 8: Retention, for any participant who is retained within football Introduction to Long Term 'Player' Development Stages 1-2 Stages 3-4 Stages 5-6 Stage 7-8 1. FUNdamentals 5 to 8 years old Ages may overlap � 2. Enjoying practice 8 to 11 years old PRIMARY SCHOOL AGE 3. Developing practice 11 to 14 years old} Ages may overlap � 4. Training for competition 14 to 16 years old SECONDARY SCHOOL AGE 5. Understanding competition 16 to 18 years old Ages may overlap � 6. Developing winning 18 to 20 years old SCHOOL LEAVER AGE 7. Training to win 20 years old plus Ages may overlap � 8. Retaining people in football Any age applies MATURE ADULT AGE Everyone has the opportunity for developing their own particular Long Term Player Development strand from the central programme with support from The FA as the national governing body. These days there are lots of opportunities to reach an elite level of performance for football. Everyone has the opportunity, it just requires a certain amount of ability and commitment. Once you have reached professional level, you could then go on to play nationaly for your country. ...read more.

Analysis/Evaluation Overall, I believe that due to the FA and other organisations such as FIFA, football is the most played sport in the world. These organizations have explored and opened up the local and national provision for football. They have played a huge part towards setting up clubs around the world and funding the game as a whole. I also think that the development of grassroots is what has made the sport so popular after so many years. Without grassroots programmes, I and many other kids would not have got involved in the game. I conclude that in order for the game to grow, more needs to be done to encourage female and disabled people to get involved in the sport. I believe that more programmes should be set up to help these participants to take part. In order to sustain the growth of football that we are currently at, I think that more money needs to go in to female and disabled football. Although I cannot see female football becoming as popular as male football, I can definitely see it being one of the most popular sports in the world in the future. Although NGB's have helped the growth of football all over the world, I also think that the increasing popularity is due to the beauty of the game. ...read more.