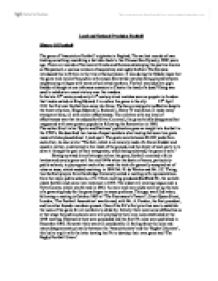 Local and National Provision Football History Of Football The game of 'Association Football' originates in England. The earliest records of man kicking something resembling a ball date back to the Chinese Han Dynasty, 2000 years ago. There are records of the ancient Greeks and Romans developing the pastime known as 'Harpastum', a curious mixture of association and rugby football. The Romans introduced this to Britain in the time of Julius Caesar. It was during the Middle Ages that the game took hold of the public with annual Shrovetide matches being played between neighbouring villages with teams of unlimited numbers. The ball was usually a pig's bladder although on one infamous occasion in Chester the head of a dead Viking was used to celebrate a recent victory over the invaders. In the late 13th century and early 14th century street matches were so popular in London that traders called on King Edward ll to outlaw the game in the city. 13th April 1314 the first ever football ban came into force. The ban proved quite ineffective despite the threat of prison. Kings Edward lll, Richard ll, Henry lV and James lll made many attempts at bans, all with similar effectiveness. The only ban with any level of effectiveness was that introduced by Oliver Cromwell, the game briefly disappeared but reappeared with even greater popularity following the Restoration in 1660. The author Strutt in his 'Sports and Pastimes' publication gave an insight into football in the 1700's. He described two teams of equal numbers who lined up between two goals made of sticks placed about 1 yard apart. The goals were between 80-100 yards from each other, he also wrote: "The ball, which is commonly made of a blown bladder and cased in leather, is delivered in the midst of the ground, and the object of each party is to drive it through the goal of their antagonists, which being achieved, the game is won." ...read more.

New Primary Competitions ESFA Council have looked at the structure of our primary competitions and with the new sponsorship agreement with SAINSBURY'S it has been agreed that the following changes will be made to the 2004-5 Sainsbury's Small Sided Competitions: - * New competition - girls only Under 11 Individual Schools' 6-a-side * New competition - boys only Under 11 Individual Schools' 7-a-side These new competitions will be in addition to the Sainsbury's Small Schools' Sixes and the Sainsbury's Under 11 7-a-Side Inter-Association Competition The Finals of the Primary Competitions for Centenary Season (2003-4) will be held at the National Sports Centre, Lilleshall on Saturday 24 April 2004 and will include the winners AND runners-up from each of the four area finals. The PE, School Sport and Club Links is part of the Government's �539 million investment project. Football, over the next three years, will receive �800,000 funded by DfES, with the project, along with six other sports, managed by Sport England. Through the School-Club Link programme, The FA aims to: - Increase the number of young people, aged 5-16 years old, playing on a regular basis in an FA Charter Standard, Community or Ability Counts programme. - Increase the number of FA Charter Standard and Community clubs - Develop sustainable partnerships between schools and FA Charter Standard clubs Local Funding will be available to support The School Club link project, whilst a research program will be set up to monitor and evaluate it's success. Phase 1 of the project will commence in March 2004 in 9 county sport partnerships that have been chosen by Sport England; Durham, Liverpool, North Riding, Shropshire, Derbyshire, Suffolk, Kent, Somerset and London. Each County FA will receive funding to work with a minimum of 4 FA Charter Standard clubs, linked to a minimum of one named school in a School-club partnership. This will cover supporting coaches fees for running introductory sessions at schools, bursaries for coaches in clubs, competitions and festivals for schools, as well as supporting liaison work for schools wishing to become FA Charter Standard. ...read more.

The FA is pleased to boast that football is now the top female sport in England - this was achieved in the 2001-02 season, two years ahead of our own tough target Women's football is a key part of The F.A.'s Development Programme: Top Sports - putting football bags in every primary school at the cost of �6 million to provide opportunities for both girls and boys and to train teachers who are predominantly female. Sport England, Football Foundation and FA funding is ensuring there are kick-start courses across the country for girls new to playing football, while developing school and club links to ensure girls develop a lifelong participation in the game rather than dropping out when they're too old for the school team. The F.A. have funded the appointment of development officers in every county to deliver programmes including girls and women's football opportunities (77 appointed so far). 7 FA Regional Development Managers (male and female) are working across the country to help introduce the playing opportunities required by today's football loving girls and women. Research has shown that professionalism in women's football is inevitable and that The FA must lead the development to ensure it is structured and will survive long-term. Fulham showed how standards can be raised dramatically with their three-year spell as full-time athletes between 2000-2003. There are now five sides within the 10-team National Division who pay their players to play football. The FA is already working to professionalise the game at all levels, from pitches to ticketing and the general promotion of the game to allowing the opportunity where talented and committed girls can make a career out of their sport. The women's game currently faces many challenges to taking steps towards professionalism, but by increasing participation and providing platforms to generate interest in the women's game as a spectator sport, The FA is driving forward the development of the game at the elite level. The FA decided to treble its women's league and cup prize funds for the 2003-04 season to give added investment directly into women's clubs. ...read more.