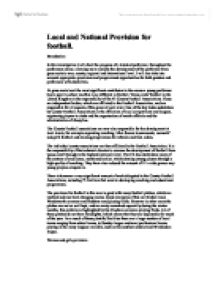 Local and National Provision for football.

Local and National Provision for football. Introduction In this investigation I will chart the progress of a talented performer, throughout the performers career, allowing me to analyse the development of the performer from grass roots to area, county, regional and international level. I will also take into account appropriate provisions and programmed opportunities for both genders and performers with disabilities. At grass roots level the most significant contributor to the access a young performer has to sport is school and this is no different in football. 'Grass-roots' football in the United Kingdom is the responsibility of the 43 County Football Associations. These are independent bodies, which are affiliated to the Football Association, and are responsible for all aspects of the game at local level. One of the key tasks undertaken by County Football Associations is the affiliation of local competitions and leagues, registering players to clubs and the organisation of match officials and the administration of discipline. The County Football associations are now also responsible for the development at local levels, for example organising coaching, Mini-Soccer tournaments, women's' and girl's football and training programmes for referees and first-aiders. The individual county associations are then affiliated to the Football Association. It is the responsibility of the technical director to oversee the development of football from 'grass-roots' through to the highest (national) level. The FA has establishes many of the centres of excellence, mentioned earlier, which develop young players through a high quality of coaching. ...read more.

There are boys and girls leagues, professional and amateur men's and women's leagues, and leagues for the disabled. As the facilities do not need to differ for most groups, the facilities available are open to all, to practice as a team, to kick-about as a group of friends or to play competitive matches. Britain should be the envy of the rest of the world as it is acknowledged that mass participation is a necessary pre-requisite in the quest for excellence. However the search for talent in the UK has and is still too much of a hit and miss affair despite the ever increasing opportunities and provision being made available. It is the development of players, which lets the provision down, as not enough players get through to the academy systems or centres of excellence as needed to build up the success of football internationally. There are however teams which show that young players can be brought through, like Manchester United (Beckham, Scholes, Neville G & P, etc), while others like Chelsea bring their talent in from abroad hoping for success. The diagram below is an overview of elite development in association football. Local Club Local School Centre of Excellence Area/district YTS County Level Youth Leagues Regional level Elite Performer National Selection Professional Career I feel that, as a country more players need to be brought through the ranks of football, either through academies, or by scouts signing them up to professional clubs where their talent can be nurtured through to playing professionally. ...read more.

The local professional football teams run a scheme where in the summer some of there players go to local primary schools to advertises football to the children and to advertises their team. The national lottery put a lot of money into funding new schemes like the all weather pitches at thorton school which are used by local pub football teams all the way up teams like Bradford city under 16s this facility is a great use. Also the money is going into lots of other scemes all other the country for male, female and disabled people. Like Thackley Football team getting new flood lights and farsley Celtic getting new indoor and outdoor training facilites. Sport England and the national lotery are pumping another 8 million ppounds to set up new leagues and teams for women ands girls. To give them the better oppertunites in football. Also big commercial companies donate money into schemes and in exchange they get advertisement. These companies may sponsor leagues, cups all over the world to give them a wide range of advertisement. The big schemes is football in the community and this goes on all over Enganed and coca cola sponsors this scheme gibving money back in the community. Another way of advertisement that is used very often is advertising at football games. This happens from the premiership to the west riding county amateur football clubs. These clubs will get payed different amounts of money dippending on the amount of advertisement. These advertisements could be seen on t.v and could have millions of people watching. ...read more.