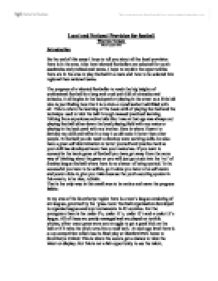 Local and National Provision for football.

Local and National Provision for football Warren Vessey Word count 976 Introduction By the end of this essay I hope to tell you about all the local provision there is in the area. Also how talented footballers are selected for youth academies and professional teams. I hope to explain the opportunities there are in the area to play football in a team and how to be selected into regional then national teams. The progress of a talented footballer to reach the big heights of professional football is a long and cruel path full of obstacles and setbacks. It all begins in the backyard or playing in the street as a little kid who is just finding how fun it is to kick a round leather ball filled with air. This is where the learning of the basic skill of playing football and the technique used to kick the ball through massed practiced learning. Talking from experience active kids like I was at that age was always out playing football either down the local playing field with my mates or playing in the back yard with my brother. ...read more.

For the youngsters there is the under 9's, under 11's, under 13's and a under 15's league. All of these are poorly managed and are played on terrible pitches, either uncut grass were you struggle to get a good kick on the ball or if it rains the pitch turns into a mud bath. At each age level there is a cup competition which has its final play at Glanford Park home to Scunthorpe United. This is where the scouts get a chance to view the talent on display. But this is not a fair opportunity to see the talent, because all the players are very nervous and there is a lot of pressure on them to impress and more often than not they have a bad game because they are just too tense and nervous. I know this because I have reached the cup final and played at Glanford Park each time as I was incredibly nervous knowing there was scouts watching you and I stank on the pitch every time. If the scouts were to watch Sunday league matches and see the talented players relaxed and playing at their best then there would be a lot more players included into established youth team squads. ...read more.

Better division clubs have more high profile media attention. The TV cameras are on them and Premier League clubs can watch the video and recognise his talent and will then put in a good bid for him and he will now rise into the Premiership and become a star if he performs well. Just like Wayne Rooney if he makes an immediate impact and impresses then he will reach the attention of Mr Eriksson, coach of the England national team. He may decide include him into his squad and earn his first England cap. But if the unthinkable happens and the player becomes irreversibly injured then he might think his career in football is over, but he is wrong. Regional counties and teams want representatives to run an academy for youngsters to play football and be noticed. In my area there is an organisation called 'Football in the community' which goes to schools and teaches training session to young kids in order to get them into football and to provide fun entertainment and to spot the most talented pupils to train in their academy. ...read more.