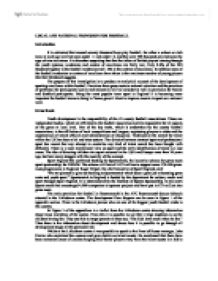 Local and National Provision For Football.

LOCAL AND NATIONAL PROVISION FOR FOOTBALL Introduction It is estimated that around seventy thousand boys play football, for either a school or club team at each age level between under 11 and under 16, and that over 500 thousand play between the ages of nine to sixteen. It is therefore surprising that that the influx of British players coming through the youth systems, academies and centres of excellence are fairly low. Only 0.6% of the 500 thousand register in the football academies and 1.6% in the centres of excellence. In addition none of the football academies or centres of excellence have taken in the maximum number of young players that their threshold suggests. The purpose of this investigation is to produce an analytical account of the development of sporting excellence within football. Provision from grass roots to national selection and the provision of pathways for participants locally and nationally will be included as well as provision for female and disabled participants. Being the most popular team sport in England it is becoming more important for football teams to bring in 'home-grown' talent to improve morale in sport on a national level. Grass Roots Youth development is the responsibility of the 43 county football associations. These are independent bodies, which are affiliated to the football association and are responsible for all aspects of the game at local level. ...read more.

He mentioned that there have been numerous cases of coaches keeping their better players away from the talent scouts in a bid to progress in the mini-leagues that go on in the local area. He talked about the tournaments in the summer and how it became profitable through teams using the bar area and purchasing refreshments. Provision for Elite performers The facilities of the two national sport centres at Bisham Abbey and Lilleshall have now been joined by the Centre at Plas-Y-Brenin in Wales; also the national sport centre at Crystal Palace. The aim of these centres is to provide a range of facilities capable of preparing athletes for international competition. The Football Association has its own world class programme in the England School of excellence where the nurturing of talent takes place. The likes of Alan Smith and James Milner have emerged form here. See figure 2 in the appendix section. In Hampshire and Dorset there has been a focus on refereeing in the sport and opportunities have been made available for training to officiate at matches. It is funded by the Football association in a bid to increase interest in football for those who are not able to pursue the sport as players. Figure 4 shows information on training modules and the parts needed to be able to become a fully fledged referee. Figure 5 on the other side of the sheet shows the progression from beginner to FIFA standard. ...read more.

These are focused mainly on a recreational theme and is not intended for those who want to progress in the sport although some of the Littledown coached do watch some of the games and may take an interest in some players. Conclusions The provision for playing football has the potential to be one of the best in the country. It is accessible for anyone who wishes to participate in the sport. There are Boys' and girls' leagues, professional and amateur leagues for men and women. In addition there is access for the disabled to the sport. The facilities are open to all at low cost and are available for recreational use and competitive use. The funding for youth development is improving with the new lottery grants introduced and those at the top are realising that it is at the early stages that talent should be spotted. The provision for the development of players is lacking. Improvements are being made but the number of players coming through the branches of academies and centres of excellence do not match the figures in other European countries such as France. This is required to build sport in this country internationally. Many football teams, especially Chelsea, import players from abroad to try and get success in the professional league. This does not help the national situation because fewer English people are being scouted for English teams. Many have said that this is the reason for the slump in England's international performances in recent years. ...read more.