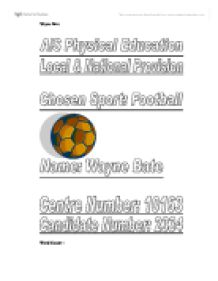 Local and National Provision for Fotball.

Word Count = Local and National Provision The sport I have chosen to reasearch locally and nationally about is football. The borough I live in and have researched locally on I Hammersmith and Fulham. Physical Activity and sport team are responsible for leisure centres, competitions, football courses and events throughout Hammersmith and Fulham, as well as organising teams for the Lillie Road 5-A-Side Football League and Harrow Youth League. There are many agencies which are involved in football, such as Sport England, Sports Coach UK and the Central Council for Physical Recreation. They work with schools and clubs to encourage the residents within the borough to participate in football, plus other sports. Over 1,200 people took up the Physical Activity and Sports Team's Exercise referral scheme operated by the health and leisure project. This scheme was designed for those who could benefit from some sort of football training because of a medical condition. The Physical Activity and Sport team have five main aims; * To promote the health benefits of active life styles * To promote a range of football that offers life style and an enjoyable way to spend leisure time. * To increase the quality of sports clubs in Hammersmith and Fulham * To attract inward investment * To increase the involvement of the educational establishments in football and physical activity There is only one main local league called Harrow Youth League which includes some of the following teams; Larkspur Rovers, Princess Park, Pinnstars, White City Boys and Court Park. ...read more.

These merchandise, such as football shirts can be bought on their official web site. Another sponsor which is mainly on England's training wear is 'Nationwide', which is one of the main sponsors of the F.A. Other sponsors include McDonalds, Umbro, Carlsberg, and Pepsi. The launch of the National Game Division of the F.A in 2000, according to the head of the campaign, was the biggest news for grass-roots football since the formation of the F.A itself, 130 years odd before that. The man who heads the campaign is Steve Parkin. He explains that the National Game covers all football below the Football League: from the conference to the parks. The National Game Division of the F.A. may not be the association but, with 40 staff, and a serious budget to spend on footballs grass-roots, it is now the largest and one of the most important, according to the F.A. Thus, the NGD is channelling over �30 a year into the game's grass-roots, with the prospect of a new dawn, heralding higher standards and better pitches, changing-rooms and facilities for clubs across the UK. The F.A is and has been investing �6m over three years to provide all primary and special schools with football equipment, teacher and training resources. The F.A has England Disabled teams as well. The local football club, Fulham FC have set up a team for deaf people, Fulham Deaf FC. ...read more.

There are some other teams which are semi-professional teams such as Arsenal F.C but not professional. Diagram of Different Levels: The Hierarchy Triangle Flow Diagram: Overview of Elite Development in Association of Football Conclusion Overall, I think that Hammersmith and Fulham have adequate facilities for grass-roots football. There are plenty of parks e.g. Acton Park, Wormolt Park and Ravenscourt Park where people can learn to play football at the lowest level, whether it is competitive situation just for a 'kick about'. There are also places where there are outdoor facilities, such as Astroturf. But there are no indoor facilities to play football. There are plenty of local football clubs, such as Acton Ealing Whistlers, but with only one main league, Harrow League, where people can sign up to play competitive football. There are also two local football academies, Queens Park Rangers FC and Fulham FC; these are the local professional teams. Another positive about the borough is that there is the only women's professional team in the country, Fulham FC. I think that the way the F.A. is run is brilliant for football. The way it manages football in the country from grass-roots level to the elite performer is fair. This means that there are many doors open to you if you are good enough, as a youngster, at football, such as centres of Excellence and football academies run by the F.A. which gives youngsters the chance to progress to the next level, in the game. ...read more.