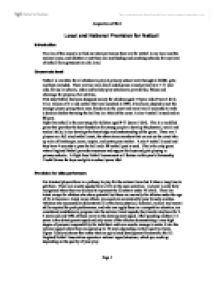 Local and National Provision for Netball.

Local and National Provision for Netball Introduction The aim of this essay is to find out what provisions there are for netball in my local and the national areas, and whether or not there are any funding and coaching schemes for any level of netball from grassroots to elite level. Grassroots level Netball is available for all children to play at primary school level through to GCSE, girls and boys included. There are two main small-sided games aimed primarily at 7-11 year olds, for use in schools, clubs and holiday play schemes to provide fun, fitness and challenge for players of all abilities. First step Netball has been designed mainly for children aged 7-9 year olds (Years 3 & 4). It is a version of 4-a-side netball that was launched in 1993, it has been adapted to suit the younger player giving them more freedom on the court and more time (5 seconds) to make a decision before throwing the ball but in a third of the court. A size 4 netball is used and an 8ft post. ...read more.

Figure 1 (below) shows that rather than an age related development framework, the All England Netball Association operates a national squad structure, which you work up depending on the quality of your play. There are a large number of leagues to play in around the country; for those who don't make County teams there are the Millennium youth games. This is part of Sport England's initiative to promote active sport. Regional tournaments are held every year. In Stafford there are two netball leagues: the Friday night league and the Stafford and district YLC netball league that takes part on Tuesdays and Wednesdays. The Friday night league is a casual league where you register your team and then play, you don't wear uniforms and anybody can play including lads so long as the other team is ok with lads, also the umpires don't have to have any qualifications to umpire. However, the YLC netball league is official with only qualified umpires and uniforms must be worn, only those registered as team players can compete. Provision for male competitors The England netball and IFNA have stated that only single s*x competitions are permitted, however England Netball stated that any netball activities up to GCSE level (aged 16) ...read more.

A version of 7-a-side netball has been formed for those in wheelchairs (but with adaptations to 4 and 5-a-side), although obviously the rules have been modified covering travelling and playing the ball. This summer the National Netball Championships for People with Learning disabilities are holding a tournament run by England netball and the English Sports Association. There will be two age categories for those U17 and those over, the aim of this event is to encourage more people to play who struggle from disabilities. Unfortunately there doesn't seem to be any local provisions for disabled netball they all seem to be on a national scheme. Conclusion I think that on a national level there are provisions being made for everyone to participate in netball, however, there is till not that much for the males or disabled participants. In the more local area there are leagues for females but this is still leaving out the disabled and the male netball players. The way that netball is at the moment means that the way to the top is only for talented female teenagers who can progress through the county level to talent squads and up to the top. ...read more.