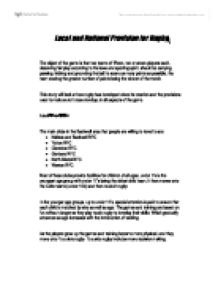 Local and National Provision for Rugby.

Local and National Provision for Rugby The object of the game is that two teams of fifteen, ten or seven players each, observing fair play according to the laws and sporting spirit, should be carrying, passing, kicking and grounding the ball to score as many points as possible, the team scoring the greater number of points being the winner of the match. This study will look at how rugby has developed since its creation and the provisions used to make sure it does develop, in all aspects of the game. Local Provision The main clubs in the Backwell area that people are willing to travel to are: * Nailsea and Backwell RFC * Yatton RFC * Clevedon RFC * Gordano RFC * North Bristol RFC * Weston RFC Most of these clubs provide facilities for children of all ages, under 7's is the youngest age group with under 17's being the oldest child team, it then moves onto the Colts teams (under 18's) and then to adult rugby. In the younger age groups, up to under 12's, special attention is paid to ensure that each child is matched by size as well as age. The games and training are based on fun without danger so they play touch rugby to develop their skills. Which gradually advances as age increases with the introduction of tackling. ...read more.

The majority of local clubs have up to 2 senior teams and several younger age groups playing and training every week. But because people have less need to leave the house with technology etc. these days there has been a decline in sporting participation. Over the last ten years numbers have dropped, where clubs had been running several senior teams and teams at all age groups, they are now struggling to get enough players for 2 senior teams and enough for several other age groups. An increase in provision could help to change this, by making it more attractive to people, get them out of their seats and off to play for their local team. Improving facilities and coaching would do this but money is needed, which can be obtained through "Sports Aid" and lottery funding. Nearly 38 million pounds has been donated to Sports England for Rugby Union from the Lottery Commission. Funding is not just for improving facilities; there are several other priorities for funding: * Epidemiology of injury and other medical concerns * Interventional trials evaluating reduction of injury * Biomechanics of injury * Concussion research * Medical concerns of rugby players specific gender issues * Drugs and supplements in rugby All these points are trying to make the provision of rugby better and make rugby more appealing by making the game safer and fairer. ...read more.

The performance pathway includes county, regional competition and an England Performance Camp that is run in conjunction with the Youth Sport Trust. Wheelchair Rugby Wheelchair rugby or "Quadball" was established in Britain in the early 90's it is the only team game for tetraplegics, or those with upper limb impairment. It was originally based on a variety of sports including rugby volleyball basketball and ice hockey. No body contact is allowed but there's plenty of wheelchair contact and players use specialist chairs - some have impact bars fitted. Eventually, it became a sport recognized by the British Wheelchair Sports Foundation and there are now many local teams all over the country and it is the fastest growing wheelchair sport in the UK. Conclusion I think local provision in my area is quite good, but it could do with a lot more funding. There are a lot of local teams and they offer opportunities for all age groups but the amount of girls' teams are very small, and there isn't a lot of encouragement to bring more girls into the game. National provisions in this country for rugby are very good but more could be done on the accessibility of the professional teams and National teams i.e. more trials, professional coaching and advertising, because rugby is still the second biggest sport in Britain (after football which has the best Provision) but is the fastest growing so provision for the sport needs to grow with it. ...read more.