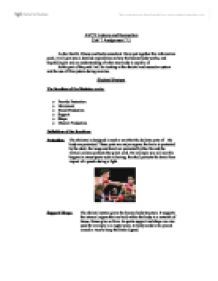 Looking at the skeletal and muscular system and the use of this system during exercise.

AVCE Leisure and Recreation Unit 7 Assignment 7.1 As the Health, Fitness and body consultant I have put together this information pack, it will give you a detailed explanation on how the human body works, and hopefully give you an understanding of what your body is capable of. In this part of the pack I will be looking at the skeletal and muscular system and the use of this system during exercise. Skeletal System The functions of the Skeleton are to: o Provide Protection o Movement o Blood Production o Support o Shape o Mineral Production Definitions of the functions: Protection: The skeleton is designed in such a way that the delicate parts of the body are protected. These parts are major organs, the brain is protected by the skull, the lungs and heart are protected by the ribs and the vertical column protects the spinal cord. For example you will see this happen in many sports such as boxing, the skull protects the brain from impact of a punch during a fight. Support/ Shape: The skeletal system gives the human body structure. It supports the internal organs that are held within the body in a network of tissue. Bones give us form. In sports support and shape are also used for example in a rugby scum, to body needs to be placed in such a way to keep the back aligned. Movement/ Attachment: The skeleton is jointed to allow movement. A joint is an articulation of two or more connecting bones, providing us with either stability or movement. Muscles are attached to our bones by tendons, and ligaments attach bone to bone. Movement is very important to any sports it allows us to make the certain movements needed to succeed. For example when striking the ball in football, a range of muscles and bones work together to allow for this movement. Blood Cell Production: Both red and white blood cells are produced in the bone marrow. ...read more.

Adduction Adduction is the movement of the bone towards the body's mid-line, in both the horizontal and vertical plane. Circumduction Circumduction is a circular movement which involves limbs performing a mixture of flexion, extension, abduction and adduction. An example of this would be the arm and the shoulder joint going round in a full circular motion. Rotation Rotation is the movement of a bone around a central axis. The arm has both internal and external rotation. An example of this would be a bowl in cricket when the arm rotates in a full motion before the ball is released. Supination Supination is the movement of the bones of the forearm so that it makes the radius and ulna parallel, for example when you put your palms up. Pronation Pronation is the crossing of the radius and the ulna, for example when putting your palms face down. Examples of Supination and pronation would be when teeing off or taking a swing in golf. Eversion Eversion is when there is movement of the sole of the foot outwards at the ankle. Inversion Inversion is when there is movement of the sole of the foot inwards at the ankle. Dorsiflexion Dorsiflexion is when you raise your toes and foot towards the tibia. Plantarflexion Plantarflexion is the pointing of the toes, used in many sports including swimming and gym. In the table this table below I have described the types of movement at each joint, showing the articulating bones, joint type and the agonist at each joint. Joint Type Articulating Bones Movement Allowed Agonist Shoulder Ball and Socket Humerus and Scapular Flexsion Extension Horizontal Flexsion Horizontal Extension Adduction Abduction Medial Rotation Lateral Rotation Deltoid Deltoid Pectoralis Major Trapezuis Latissimus Dorsi Deltoid Subscapularis Teres Major Infraspirtous Teres Major Ankle Hinge Talus Tibia Fibula Plantarflexsion Dorisflexsion Tibialis Anterior Gastrocnemius Knee Hinge Femur Tibia Flexsion Extension Hamstring Quadriceps Satorius Rectus Femoris Vastus Femoris Vastus Lateralis Hip Ball and Socket Accetebulam Of the pelvis Head of the Femur Flexsion Extension Iiupsous Gluteus ...read more.

Excessive movements such as extension or flexion may be restricted by ligaments. Some ligaments prevent movement in certain directions. Tendons A tendon is a tough and flexible band of fibrous tissue. The tendon is the structure in your body that connects the muscle to the bones. The skeletal muscles in your body are responsible for moving your bones, thus enabling you to walk, jump, lift, and move in many ways. When a muscle contracts, it pulls on a bone to cause this movement. The structure that transmits the force of the muscle contraction to the bone is called a tendon. Levers First Order Levers 1. Fulcrum- the point of the movement or pivot, usually the centre of a joint in the body. 2. Load- the body weight or some external object 3. Effort- a muscular force to move the load The fulcrum is between the effort and the load: An example of this would be the load the neck has to carry the skull: Second Order Levers The load is between the fulcrum and the effort; the lever has a relatively small force and can move a larger weight. This is transmitted through the very strong achilles tendon. Third Order Levers The effort is between the load and the fulcrum. This is not as efficient as a second order lever, but a small muscle movement creates a long lever movement. Agonist and Antagonist When looking at the movement of the body it is important to consider the muscles. When movement takes place it is the prime movers (agonist) contract to allow movement to take place. The antagonists are the muscles that are resisting movement and so relax. So in the case of bending the arm at the elbow the prime mover (agonist) would be the biceps, and the triceps act as antagonists. These types of muscles always in pairs that work against each other, and when one contracts the other relaxes. Synergists They assist the agonist and antagonist and fixator muscles, providing stability. The synergists reduce the amount of unnecessary movement when the prime mover contracts. They help to fine tune the movement. ...read more.