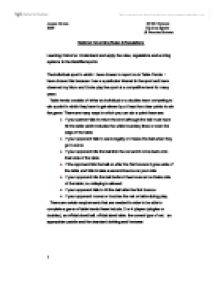 National Governing Rules & Regulations Learning Outcome: Understand and apply the rules, regulations and scoring systems in the identified sports. The individual sport in which I have chosen to report on is Table Tennis. I have chosen this because I have a particular interest in the sport and have observed my Mum and Uncle play the sport at a competitive level for many years. Table tennis consists of either an individual or a doubles team competing to win a point in which they have to get eleven by at least two clear points to win the game. There are many ways in which you can win a point these are; * If your partner fails to return the shot although the ball must have hit the table which includes the white boundary lines or even the edge of the table. * If your opponent fails to serve legally or misses the ball when they go to serve. * If your opponent hits the ball into the net and it come back onto their side of the table. * If the opponent hits the ball so after the first bounce it goes wide of the table and fails to take a second bounce on your side. * If your opponent hits the ball before it has bounced on theirs side of the table; no volleying is allowed. * If your opponent fails to hit the ball after the first bounce. * If your opponent moves or touches the net or table during play. There are certain requirements that are needed in order to be able to complete a game of table tennis these include, 2 or 4 players (singles or doubles), an official sized ball, official sized table, the correct type of net, an appropriate paddle and the standard clothing and footwear. The Ball There were recently world wide changes for the size of the ball. ...read more.

However, if the ball is out of play because of a throw-in or free kick etc. then the ball is just replaced and the match restarted accordingly. The only way a ball can be replaced is with the authority of the referee, this I believe is very important because it prevents there from being any unofficial b***s being used when they are not necessary. The Number of Players A match consists of two teams both with eleven players, with one of them being a goalkeeper; a match cannot be started or continued if either of the teams only consist of less than 7 players. This I believe is a weakness of the game as I think the minimum a team can play with is 8; if 4 midfield players for one team were to be sent of then that is a whole section of a team taken out. I believe these would be very difficult circumstances to play in and the game would be totally one sided. In any official competition, i.e. under the patronage of FIFA, confederations or the national associations, a maximum of 3 substitutes may be used. However, different competitions can nominate from 3 up to 7 players but they must state how many in their rules. In all matches, professional, semi-professional, or non- league for example, the referee must be informed of all the substitutes' names before the match; if they are not named then they can not play any part in the match. Substitution Procedures Substitutions may be made at any time through out the game, including half time. For a substitute to enter the field of play certain procedures must be followed. * First the referee is informed about a proposed substitution * The substitute may only enter the pitch once the player that is coming off has left the field of play. * The substitute must enter the field of play at the half way line and during a stoppage in the match. ...read more.

If the thrower produces a foul throw then the opposition are awarded a throw-in instead. A goal kick is another method of restarting play and a goal may be scored directly from a goal kick. http://simpler-solutions.net For a goal kick to be awarded the whole of the ball must have crossed the goal line either in the air or on the ground and a goal has not been scored. A player of the defending team, either an outfield player or the goalkeeper, take the goal kick from anywhere inside the goal area. All other players must remain outside the penalty area until the ball has been kicked. Who ever kicked the ball may not touch it again until another player has done so. If the ball is not kicked out of the penalty area then the kick is retaken. Another method of restarting play is by taking a corner kick in which a goal may be directly scored. A corner kick is awarded when the ball passes over the goal line and was last touched by the defending team. For a corner kick to be taken the attacking team must place the ball inside the corner arc at the nearest corner flag post. All other players must remain 10 yards away until the ball has been kicked and it is back in play. The kicker may not touch the ball again until another player has touched it. These methods of restarting play are clear and understand so both teams no the result of when a ball is out of play. This makes the game quick and efficient as they do not have to wait for the referee to decide what the result is as they should already know. As with table tennis there is still a lot of room for improvement within the rules. These may evolve over the years as to rule out any controversial decisions and to make it a much fairer game to play. Joanna Davies Joanna Davies BTEC National IB09 Diploma Sports & Exercise Science 1 ...read more.