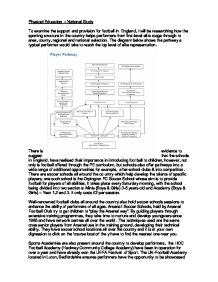 National Study. To examine the support and provision for football in England, I will be researching how the sporting structure in the country helps performers from first-level elite stage through to area, county, regional and national selection.

Physical Education - National Study To examine the support and provision for football in England, I will be researching how the sporting structure in the country helps performers from first-level elite stage through to area, county, regional and national selection. The diagram below shows the pathway a typical performer would take to reach the top level of elite representation. There is evidence to suggest that the schools in England. have realised their importance in introducing football to children, however, not only is football offered through the PE curriculum, but schools also offer pathways into a wide range of additional opportunities for example, after-school clubs & into competition. There are soccer schools all around the country which help develop the talents of specific players, one such school is the Orpington FC Soccer School whose aim is to provide football for players of all abilities. It takes place every Saturday morning, with the school being divided into two sections: Minis (Boys & Girls) 3-5 years old and Academy (Boys & Girls) ...read more.

They are also responsible for administering club and player registration as well as promoting development amongst those bodies and referees . Football's National Governing Body - The F.A is responsible for developing and regulating the game at levels from international football to the grassroots. They invest �60m into the game each year with the income mostly coming from sponsorships. The F.A. Hat-Trick Programme delivers Community Football Development workers in the most deprived areas of the country, and they are committed to removing any barriers to people of all ethnic backgrounds playing football. The professional structure of football is important in the development of performers. The system contains a hierarchy of leagues following the principle of relegation and promotion. The advantage for performers is that teams from more prominent teams than the one they play can purchase them from their respective clubs. Talent Identification of each phase of the football performer pathway is as follows: Phase One: (Identification of Talent) - Teenagers between 14-16 are screened within their school via a host of physical and physiological assessments, and then their results are compared against a national database, if they show evidence of surpassing the average standards, they progress onto level two. ...read more.

In England, there is a whole host of opportunities specifically aimed at disabled athletes, the diagram below shows the importance the country pays to include everyone regardless of their ability: The level of provision for females in England is much lower than that of the provision for males, due to the lack of female teams and the lack of demand for female footballers. The FA funds full-time football development staff in each County Football Association to deliver its development programme. These include 47 Women's and Girls' Football Development Officers "working strategically across the country to introduce the playing opportunities required". There is a gender imbalance for performers progressing through to elite level of representation. In conclusion, having researched the provision for football performers in England, I can say that there is no shortage of opportunities available and it is mostly at the digression of people to make the most out of them. One positive is that most of them are free and do not require any previous experience which is good as it involves everyone regardless of their ability. To improve provision for football performers, there could be a remit for females to progress through the pathways the same as males. ...read more.