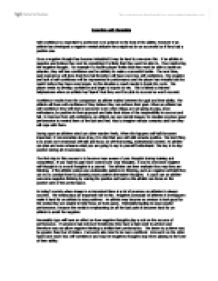 Negative self-thoughts Self-confidence is essential if a performer is to achieve to the best of the ability. However if an athlete has developed a negative mental attitude they might not be as successful as if they had a positive one. Once a negative thought has become imbedded it may be hard to overcome this. If an athlete is negative and believe they cant do something it is likely that they wont be able to. Thus reinforcing the negative thought. For example if a hockey player thinks that they wont be able to tackle an attacker, they will lose confidence and be unlikely to make a successful tackle. The next time, past experience will show that they fail therefore will have even less self-confidence. ...read more.

To improve their self-confidence, an athlete can use mental imagery to visualise previous good performance to remind them of the look and feel. Also to imagine various scenarios and how they will cope with them. During sport an athletes mind can often wander freely. When this happens self-talk becomes important. If concentration does stray, it is vital that your self-talk remains positive. The best thing is to avoid over-emotional self-talk and focus on self-instructing, motivational content. An athlete can plan and even rehearse what you are going to say to yourself beforehand. The key is to stay positive during all circumstances. The first step in this process is to become more aware of your thoughts during training and competition. ...read more.

Potentially leading to unsuccessful performance. Because the media is emphasising on all the bad point it becomes hard for an athlete to avoid the negative. Personality type will have an effect on how negative thoughts play a role on the success of performance. If someone had extrovert tendencies they have a high need to achieve and therefore may not allow negative thinking to inhibit their performance. The desire to achieve may be greater than fear of failure. Extroverts also tend to be more confident. Introverts on the other hand have much less self-confidence and may let negatives thoughts stop them playing to the best of their ability. Overall the more you can remove negative thoughts and replace them with positive ones the more successful an athlete you will have the potential to be. ...read more.