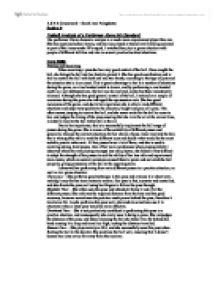 Netball Analysis of a Performer Above My Standard.

Netball Analysis of a Performer Above My Standard The performer I have chosen to analyse is a much more experienced player than me. She has captained school teams, and has also played at Island level by being selected as part of the Jersey under 18's squad. I watched her play in game situation with people of different abilities and also in several practice/isolated situations. Core Skills Passing and Receiving When receiving a pass she has very good control of the ball. Once caught the ball, she brings the ball into her body to protect it. She has good coordination and is able to control the ball with both one and two hands, according to the type of pass and the situation she is in on court. This is great advantage to her in a number of situations during the game, as a two handed catch is slower, and by performing a one handed catch in a well defended area, the ball can be received, controlled then immediately released. Although she has good general control of the ball, I noticed on a couple of occasions during the game she infringed the repossession rule. ...read more.

Her footwork is generally stable, however I think as she is a very confident player and moves very quickly, she overstretches in landing, therefore her weight is not evenly distributed so she overbalances. This causes her to have to rush her pass n, or take another step, causing her to be penalised for footwork. She can successfully perform a pivot when required; however she is also able to land on her outside foot, which avoids her having to perform a pivot, therefore not wasting as much time. She has the ability to alter her footwork to suit the situation, and the pace of the game, however favours the use of the 'one-two landing and rarely uses a two-footed landing. As she has been coached and played with people of a high ability she has developed the skill of performing more advanced echniques such as turning in the air, instead of performing a pivot once landed. She is very confident performing such manoeuvres as part of a drill, however despite her experience doesn't use them as often as would be beneficial to her in a game. Shooting She plays mostly in attacking positions, and has experience of playing as GS and GA. ...read more.

She positions herself so she is able to watch the ball, the events of the game and her opponent at the same time, which was successful for her in the majority of circumstances. As she is experienced, she is able to anticipate well where the opposing team is likely to make their next pass, giving her the opportunity to intercept the ball. She gets a fairly good height off the ground and has good timing, however doesn't extend her arms fully enough t reach for the ball, so she doesn't always manage to properly control the ball. She is not particularly suited to defence positions in the 'D' as she is not very tall. When static marking in the 'D', she doesn't get a full stretch cross to the ball, so doesn't successfully block the shot, Her balance was stable in most circumstances, however on some occasions, she toppled forward, causing her to infringe the 3foot regulation. As before when moving free, she gets over determined to mark her opponent once again causing contact giving the opposing team a penalty pass. Although she is not very tall, when defending in the 'D', she is able to receive rebound very successfully. She jumps well to reach the ball, and controls the ball as required. A.S P.E Coursework - Sarah-Jane Poingdestre Section B ...read more.