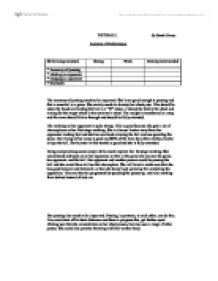 NETBALL By Sarah Davey Analysis of Performance Skills being analysed Strong Weak Development needed * Accuracy of passing * Marking an opponent * Dodging an opponent * Footwork The accuracy of passing needs to be improved. She's not good enough at passing and this is essential in a game. She mainly needs to develop her chest pass. This should be when the hands are holding the ball in a "W" shape, it should be held at the chest and aiming for the target which is the retriever's chest. The weight is transferred in a step and the arms should follow through and should be fully extended. The marking on her opponent is quite strong. This is good because she gets a lot of interceptions on her first stage marking. She is always 1metre away from her opponents landing foot and she has one hand covering the ball and one guarding the space. Her timing of her jump is good and 80% of the time she either catches, blocks or tips the ball. ...read more.

The WA is more likely to get the pass, so side and front mark her. Then, when the C is going to throw the ball, (now more likely to be GA), the C will run across and intercept the diagonal ball. If not, the WD will pick up the opposition's C and then the C will pick up the WA. You can use tactics and strategies to mark an opponent and also get free from an opponent. You could mark an opponent from the front or side-on if in centre court. If in defence and defending circle, mark from either side, (depending on positioning of shooter and where the ball is). Also, make sure that you only decide to do 1 or 2 types of marking. This could be 1st stage, 2nd stage or 3rd stage. Otherwise the game could become messy and uncontrolled by the defenders. To get free you could do a twist, which is a type of dodge. Or you could choose another dodge. Making sure that the first few strides when sprinting to retrieve the ball is sprinted with 100% effort. ...read more.

This will improve confidence and will make the players want to win more. If you restrict a player and mark her up the court, then she'll be forced out of the attack's passing. This makes it harder for the opposition and is much easier to mark. It can also tire the opposition, which could make them loose concentration and make more errors that that shouldn't make. It also opens the game out and keeps the court less compact. Fitness levels can affect a player or team's performance. Endurance helps you last the game without getting tired too easily. Speed helps with footwork and helps the player change speed, when needed in a game, much easier. Agility helps attacking players get free more easily and helps defending players defend better. Core strength helps balance and strength. This is needed so that when you catch the ball, you don't loose balance and end up throwing the ball to the other team for example. Scientists have found that if you have good core strength, then you are less likely to injure your back and knees. Another factor, psychology, could affect a player or team's performance. Psyching yourself up before a game could help you concentrate more and be more determined. ...read more.