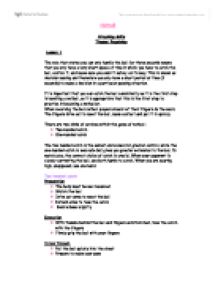 Netball Attacking skills Theme: Receiving Lesson 1 The rule that states you can only handle the ball for three seconds means that you only have a very short space of time in which you have to catch the ball, control it, and make sure you send it safely on its way. This is known as decision making and therefore you only have a short period of time (3 seconds) to make a decision in a particular passing situation. It is important that you can catch the ball consistently as it is the first step in handling a netball, so it is appropriate that this is the first step to practise in becoming a netballer. When receiving the ball netball players should let their fingers do the work. The fingers drive out to meet the ball, make contact and pull it in quickly. There are two kinds of catches within the game of netball: * Two-handed catch * One-handed catch The two handed catch is the safest and allows for greater control, while the one-handed catch is less safe but gives you greater extension to the ball. In match play, the correct choice of catch is crucial. When your opponent is closely contesting the ball, use both hands to catch. When you are soaring high, unopposed, use one hand. Two handed catch Preparation * The body must be well balanced * Watch the ball * Drive out arms to meet the ball * Extend arms to take the catch * Bend elbows slightly Execution * With thumbs ...read more.

off the floor * Where possible - the body should be behind the ball * Eye contact on the ball at all times Task 3 - progression 1 * Toss the ball over your head * Turn 180 degrees * Catch the ball Progression 2 * Toss the ball over your head * Turn 180 degrees * Jump and catch the ball (when landing apply the footwork rule.) Jumping up and stretching for the ball, means that the ball is in the air for less time, so there is a less chance of the ball being intercepted. Task 4 - progression 1 * This task is called the "pepper pot" * Three people are needed, with two b***s * There are two feeders and one worker The feeders pass the ball alternatively to the worker. The exercise begins simple as the workers only pass the ball at a moderate pace, also the distance that the ball is being passed to the worker, is only short. This means that the workers vision is only quite narrow and is therefore able to see where and when the ball is being passed. Coaching points * Keep eyes on the ball at all times * Concentrate * Release an accurate chest pass back to the feeders * Catch the ball with safe hands - s****h the ball into the chest Progression 2 To make this task more difficult, the feeders would increase the speed of their passes. ...read more.

Progression 4 If players are receiving from the right they must land with the right foot and receive the ball with the right hand. This is the same for players receiving the ball from the left. They must land with the left foot and receive the ball with their left hand. Coaching points * All players must be fully focused on the task * Passes should be accurate * Move at a constant pace throughout the drill * Make sure you work as a team, i.e. communicate Strengths and weaknesses Throughout this lesson we concentrated on the skill of receiving. I carried out various tasks which all began at a basic level but then eventually progressed so that the skill became more complex and related specifically to a game situation. I analysed my performance throughout the lesson and I have identified the strengths and weaknesses within my performance. Strengths * I can catch the ball consistently * I s****h the ball into my chest quickly * I have safe and sure hands when catching the ball with two hands * I always watch the ball until I take the catch * I have fast wrist action * My body is always well balanced when receiving the ball * My judgement of the speed of the moving ball, flight and height of it Weaknesses * My fingers are not always stretched out to make contact with the ball * Pulling the ball into my chest quickly in a game situation, where pressure and time are factors that affect your performance. * I could improve my control when catching with one hand ...read more.